We have learned a lot about teaching history as well as history itself through this DBQ project.  First off, we were reminded about how vast history is and how deep you can go with a topic.  Our topic developed and changed over the course of the semester, but it always stayed within the realm of America in the 1920’s.  The reason we switched around so much was because we realized there was so much going on in the 1920’s in America and had to decide on a corner to focus on. We eventually decided upon views of immigration in the 1920’s in America, not only because there are a lot of primary sources on the topic but also because it directly connects to the hot contemporary topic of views of immigration today in America.

Some difficulties we encountered were sifting through all the primary sources out there.  We also struggled with coming up with a narrow, specific question for our DBQ. Additionally, we struggled with time management in devoting more time to this project, due to the impending due date and demanding assignment of our work sample. If we were to do this over, we might select an even more narrow topic to make it easier to decide which primary sources to include.

We did learn over the course of this project, though, the value of having students examine historical documents.  It is vital for students to be placed in the role of historian, in order to immerse them history and see it as more than memorizing facts.  It is also important to come up with narrow, specific questions for historical document examination.  We look forward to using “historical labs” in our future classrooms, by having students examine evidence and conduct their own observations and inferences of what that historical evidence means and says.  It is equally important as well to help students make connections between past and present events, in order to see how the past affects today through similar contemporary events.

The events that occurred the evening of March 5, 1770 are referred to as “The Boston Massacre” by Americans and “The Incident on King Street” by the British.  Which is it?  The purpose of this assignment rests in deciding just that, within sourcing and corroborating primary sources from the event.  The target grade level is high school.

At the beginning of the lesson, I will show the following clip from the HBO original series John Adams. 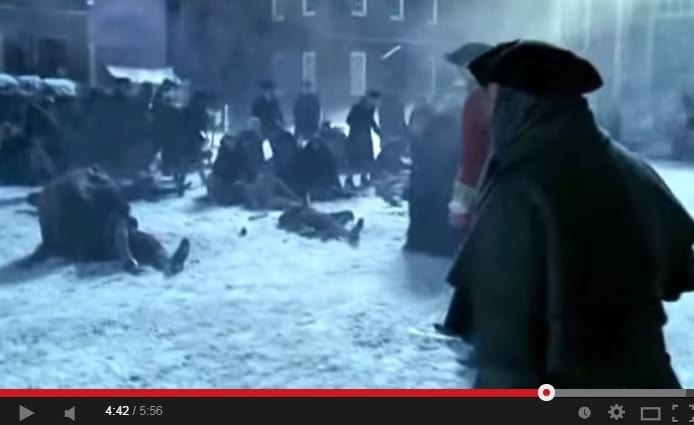 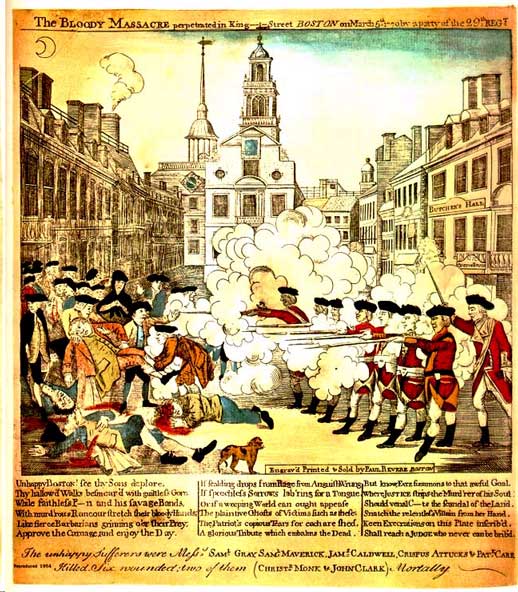 The students will then move on the testimony from Sam Adams, John Hancock, and others:

“On Friday, the 2nd instant, a quarrel arose between some soldiers of the 29th and the rope-makers journeymen and apprentices, which was carried to that length, as to become dangerous to the lives of each party, many of them being much wounded. This contentious disposition continued until the Monday evening following, [March 5th] when a party of seven or eight soldiers were detached from the main guard, under the command of Captain Preston, and by his orders fired upon the inhabitants promiscuous lyin King Street, without the least warning of their intention, and killed three on the spot; another has since died of his wounds, and others are dangerously, some it is feared mortally, wounded. Captain Preston and his party are now in jail. An inquiry is now making into this unhappy affair . . .”

Finally, the students will examine the testimony from British Captain Thomas Preston

“About 9, some of the guard came to and informed me the town inhabitants were assembling to attack the troops, that that the bells were ringing as the signal for that purpose . . . In my way there, I saw people in great commotion, and heard them use the most cruel and horrid threats against the troops. They immediately surrounded the sentry [British soldier] posted there, and with clubs and other weapons threatened to execute their vengeance on him. . . . the unhappy affair took place without any loading in their pieces [muskets]; nor did I ever give orders for loading them. The mob still increased and were more outrageous, striking their clubs…and calling out, come on you rascals, you bloody backs, you lobster scoundrels, fire if you dare . . . fire . . . At this time I was between the soldiers and the mob, parleying with and endeavoring all in my power to persuade them to retire peacefully, but to no purpose.”

Lesson Reflection: This lesson reminded me how important it is to show students that history is much more than facts and dates.  Showing them pieces of the past and having them examine it like evidence helps students feel more connected to the past, since they’re handling pieces of the past right in their hands.  The topic I picked was rather easy for primary source evaluation, since it was so controversial and contains several different points of view.  In the future, I look forward to doing this activity with historical events that do not appear to be so controversial at first, to show students the value of looking at primary sources, as well as facts in a history book, with a critical eye.

My 7th grade students and I are going to explore the world of Islam!

To begin, students will turn to section two of chapter five in their social studies book-“Beliefs of Islam.”

We will read the chapter as a class.  I will select a student at random via popsicle sticks and that student will read one paragraph out loud.  After each paragraph, I will ask students brief questions to ensure they are comprehending what they are reading as we go along.

When we are done with the reading, students will have a discussion within their table groups.  Since I am placed in a Catholic school, I will have students compare and contrast Islamic and Catholic beliefs.  One group member will record the differences and similarities. They can set up the notes anyway the like-venn diagram, list, pictures-as long as they understand it.  They will also discuss what they found the most interesting about Islam.

Next I will assign what will be used to assess their learning.  Students will create a brochure that describes the five pillars of Islam.  The five pillars are a staple of the Muslim religion.  Therefore, it is essential that my students fully grasp the five pillars in order to completely and fundamentally understand Islam.

The five pillars of Islam are:

I will encourage students to layout the brochure any way that they like.  However, they must include in the brochure:

Students will first create a rough outline-it could be as simple as a list-of what they plan to include in their brochure.  They also will sketch a layout for their brochure.

After doing this assignment, I now understand better the importance of peer and self reflection.  I really valued getting to witness it first hand when we went over our assignments with our peers.  In my lesson, I tried to emphasize student and peer reflection as well.  It gives the students more autonomy and I think it makes them feel like they do have the ability to improve after citing it themselves, rather than an adult.  In the future, I will definitely keep peer and student reflection at the top of my list when it comes to planning lessons.