Introduction & context: In November of 1978, 918 people perished (primarily by their own hand) in a remote jungle in South America. The event rocked the United States, bringing the word ‘cult’ to mainstream culture and inspiring the callous aphorism: ‘don’t drink the Kool-Aid.’ These people, along with many others, were part of a social organization/church called ‘The Peoples Temple,’ founded by James Warren Jones.

The passing of time and the hindsight of the ‘final day’ has overshadowed the initial intentions behind the movement. This lesson explores the reasons people were drawn too/joined the Temple, its evolution, and ultimate collapse.

This lesson examines multiple documents that span the chronology of the Peoples Temple and present the different ‘faces’ it possessed.

The documents will help build a more personal narrative, rather than a reduction of popular culture. This allows students to think critically about who the individuals in The Peoples Temple were, and their motivations in joining and staying with the group, despite its extreme decline.

I will ask the students to think about what was happening in the United States and why that is a significant factor.

It is ultimately an exploration of how the systematic racism and stratification built into the fabric of the American system is largely responsible for the deaths of these people.

Essential question: What reasons did the people of Jonestown have for joining the temple and why did they ultimately die because of it? Does American society hold culpability? If so, in what way(s)?

Assignment: Students will be exposed to multiple primary source documents and, drawing their own conclusions, asked to critically respond to the essential questions above in a short essay. This lesson is intended for 11th/12th grade students. I would love to teach a class that examines modern American history through the leanse of pop culture and media. This lesson would be nestled within a class including music, television, and movies.

Content: This lesson walks student’s through a selection of movie trailers, each depicting the Vietnam War. It moves chronologically with a series of questions/discussion prompts on each slide asking students to reflect upon how the movie trailer presents the war and the characters (both real and fictional) depicted. The point of this lesson is to examine how American social media reflects the general feelings of the nation. 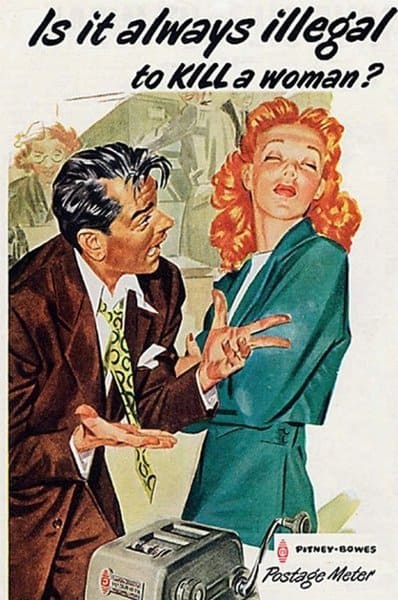 Context: An alarming advertisement (date unknown) encourages men to beat their wives. It offers a pamphlet on how to properly keep your wife in line. *The modern version, written by Dr. Steve Ogan in 2013, is available on amazon under ‘self help’ books with the description: “Most men do not know how to treat their wives, especially when these women fail to play the roles divinely stipulated for them. In this book, you will discover how a husband can help his wife overcome the negative traits in her character while correcting the wrong foundations that may have been laid down in their union.”

The companion book ‘How to Beat your Husband,” also written in 2013, has a similar description: “Crucial issues are discussed here which will improve and save any marriage. Issues such as: understanding spiritual foundations in marriage, what a wife must do to win back an unfaithful husband, what a wife must do to rekindle the love of a husband who treats her with contempt.”

*Note- I find it hard to believe that this is a real modern set of books, but my research shows that it is. Please comment if you know this to be true or otherwise.

Caption Writer: What is this ad implying? Why do you think there is a modern version? What does this say about women’s role in society during the time the ad was published?

Response: The ad gives you two options- Yes and No. Both imply that ‘the husband’ has beaten their wives at some point, either currently or in the past. Sexism remains rampant and dangerous in the world. It is always the woman’s fault and they must ‘win back’ the affection of their husband, even if that means ‘getting the sense beaten into them.’

Context: 1953: Alcoa Aluminum’s ran this ad for soda in 1953 describing soda with bottle caps so easy to open “without a knife blade, a bottle opener, or even a husband.”

Caption writer: I will say, seeing this ad got me straight to the fridge for a cold Coca-Cola. Thank god I was able to open it without my husband! Otherwise I really don’t know what I would do.

Who is the target audience for this advertisement? What is it implying about women?

Response: This ad is clearly directed towards women. It implies that women are both weak, stupid, or both. This sort of marketing was widely accepted during this time period. It could also be appreciated by a kind and loving husband, picking up his wife a soda from the grocery store. Wait, no. Women do the shopping.

Caption Writer: I could’t choose just one with these powerful cigarette ads. One implies that the best and most worthy women are thin and rich. How does this perpetuate body image in the 1960’s? is it so different than the targeted ads of the following decades?

What is the second ad saying? Are either one of these ads problematic. Why or why not?

Response: These ads are dangerous perpetuations of negative female body image. The first one is saying that the best women are thin and rich. Two clearly defining characteristics of what it means to be a ‘worthy’ woman during this time period. It is saying that it is a woman’s job to fit into these categories in order to be desirable to a man. The second image shows a man blowing smoke into the face of a woman. This is both disrespectful and disgusting. However, it is widely acceptable to degrade women in this way. Many men still hold these actions to be acceptable. A modern example is ex-governer of New York Andrew Cuomo, who resigned in 2021 after multiple allegations of sexual abuse were reported. In Cuomo’s resignation speech he stated “”There are generational and cultural shifts that I just didn’t fully appreciate”