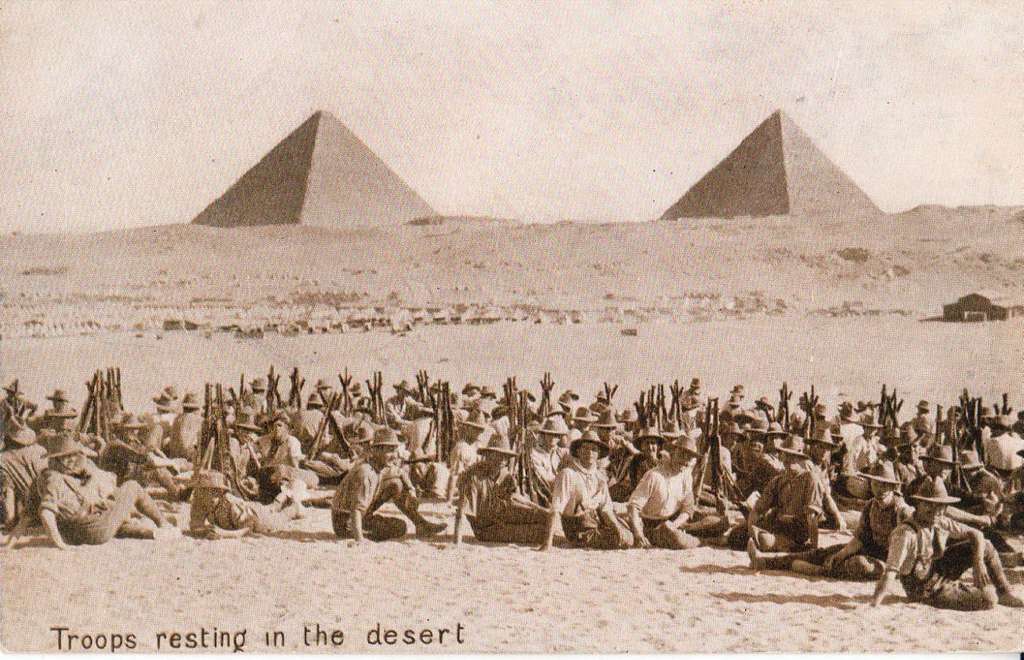 The Australia and New Zealand Army Corps (ANZAC) was the regiment of soldiers sent by their countries to serve the British Empire during WWI. They fought most notably in the Battle of Gallipoli, where they faced crushing defeat by Ottoman forces in 1916. Although the ANZACs were defeated in this battle, the memory of those who lost their lives in the war is remembered each year on ANZAC day. Pride and honor of the ANZACS has formed a significant part of Australia’s national identity

Caption Writer Icebreaker: Does this photo have a caption? If so, how successful is it in providing context to the photo? Then, create your own caption for this photo.

Context: Many ANZAC (Australia and New Zealand Army Corps) soldiers travelled through Egypt during WWI, especially on their way to Gallipoli.

Expected Student Response: The caption of this image reads “Troops resting in the desert.” This caption seems a bit vague. It helps me to understand that these are soldiers (supported by the many guns in the photo), but it does not give much context as to who these men are and why they in front of the Egyptian Pyramids. I would recaption this photo “ANZAC troops rest near Egyptian Pyramids during WWI.”

Anomalies Icebreaker: Analyze this image. What surprises you about it? What seems out of place?

Context: The ANZAC forces brought a young kangaroo with them from Australia as a mascot. This was primarily to lift spirits and remind the soldiers of their home. This photo depicts the mascot with the soldiers while they travelled through Egypt.

Expected Student Response: Is that a kangaroo? With the Egyptian pyramids in the background?? This seems like an anomaly because kangaroos are only native to Australia. Also, the people in the photo are carrying arms and dressed in soldiers’ uniforms, yet they are stopping to play with the kangaroo. It is very interesting that a small animal like this would be on its way to a warzone!

Missing Pieces Icebreaker: Analyze this image. What seems to be missing from this siege photo? How do the missing pieces affect how we understand the context of this image?

Context: This photo is a print from a WWI ANZAC book dated 1917.

Expected student response: This photo shows several ANZAC soldiers preparing to fire a Howitzer. It takes at least 7 men, and several others are watching vigilantly. What is not pictured in this photo is who/what they are firing at. We cannot see their enemy forces, which would provide context to the photo. The setting of the image also seems unclear, as there are no clear indicators of the terrain besides the large trees overhead. Also not pictured is the aftermath of the blast. I do not think these things were left out intentionally. The soldiers are focused on their high-stress task and probably did not have time to consider what was left out of the photo.

6 Replies to “Images of the ANZAC Legend”