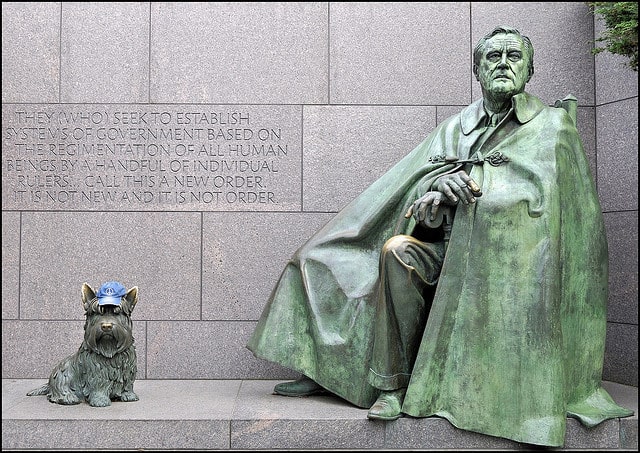 Target: 8th or 11th grade (caliber of questions can be tailored based upon grade)

For Students: The following two excerpts are both from inaugural speeches given by FDR. Based upon what you know about the time during which FDR served as president, respond to the following prompts:

For Teachers: Students should have enough knowledge about FDR’s presidency that they will be able to identify what issues he was addressing in each speech, and be able to put them into context. They will be able to pick up on the fact that he was far more verbose in the first speech given than the second, indicating that this was his first, or at least an earlier speech. By the time he gave the second, he was used to doing this, and the people were used to hearing from him, thus he felt less of a need to be so wordy. They will also notice the repeated calls to be courageous during this time.

Note: The dates attached to the speeches would not be provided, but are included for the reader’s knowledge.

“I am certain that my fellow Americans expect that on my induction into the Presidency I will address them with a candor and a decision which the present situation of our Nation impels. This is preeminently the time to speak the truth, the whole truth, frankly and boldly. Nor need we shrink from honestly facing conditions in our country today. This great Nation will endure as it has endured, will revive and will prosper. So, first of all, let me assert my firm belief that the only thing we have to fear is fear itself—nameless, unreasoning, unjustified terror which paralyzes needed efforts to convert retreat into advance. In every dark hour of our national life a leadership of frankness and vigor has met with that understanding and support of the people themselves which is essential to victory. I am convinced that you will again give that support to leadership in these critical days.”

“Mr. Chief Justice, Mr. Vice President, my friends, you will understand and, I believe, agree with my wish that the form of this inauguration be simple and its words brief.

We Americans of today, together with our allies, are passing through a period of supreme test. It is a test of our courage—of our resolve—of our wisdom—our essential democracy.

If we meet that test—successfully and honorably—we shall perform a service of historic importance which men and women and children will honor throughout all time.

Reflection: As usual, I felt that the class review process went smoothly. I have used Google Docs to work on projects with people before, so I was already fairly comfortable using the comments option. It was a fun experience being able to incorporate that into a class. While working on these lessons was fun, I still strongly believe that these SHEG inspired activities are still best suited for being used as a warm-up, or part of a review session. An entire lesson could not be taught on this. Perhaps by combining a few slightly different formats of this activity, you could teach an entire lesson on thinking like a historian and examining documents. Beyond that though, this is just a quick exercise.