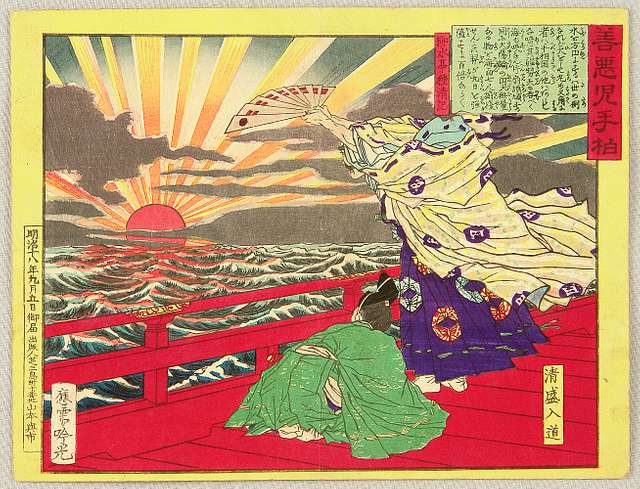 Context: Front cover from a Japanese magazine called Sekai Gaho, which translates to Pictorial World in English. In the picture, Japanese soldiers are celebrating their victory over China in the Battle of Shanghai, which was one of the bloodiest wars in World War II.

Icebreaker prompt: Which symbols are featured in this image? In what context do they fit in? Are they still seen today?

Another symbol in this image is the Hinomaru, which was the official flag for the Empire of Japan. The Hinomaru was not associated with Japan’s past atrocities to the same degree as the Rising Sun Flag, so it remained the national flag of Japan post-World War II and even up to the present.

Context: From front to back, the women are Italian, Japanese, and German elites. Their names are Francesca, Akiko, and Ursula accordingly. Each of the women are holding a hagoita (wooden paddles used in a badminton-like sport) out of respect to other leaders of the Axis powers. This image was the cover of a magazine called Shashin Shuho, which translates to Photograph Weekly Report in English. This issue was published in January 1941.

Icebreaker prompt: Analyze the image and create a thought bubble for each of the women.

Francesca: “I can’t believe I’m holding a picture of this jerk. Him and Mussolini dislike each other.”

Ursula: “What is Akiko wearing? I’ve never seen anything like that in Germany before… it’s so different.”

Context: These are Japanese soldiers fighting in the Battle of Changsha, which was fought in 1939 and resulted in Chinese victory. This image was the cover of a magazine called Shashin Shuho, which translates to Photograph Weekly Report in English. This issue was published in August 1941.

Icebreaker prompt: Brainstorm at least three questions about this image and arrange them in order of curiosity.

How were they able to edit the coloring of this image to make the Hinomaru stand out? Image editing was primitive back then, so I’m curious how they did this.

What is beyond the smokescreen? I wonder how staged this image is, or if there were actually enemy troops downrange?