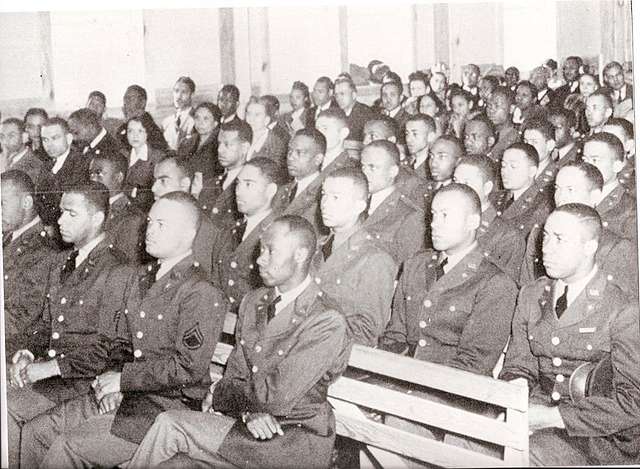 Context: Official U.S. Army propaganda poster that was circulated between 1941 and 1945. On the poster, you can see an official U.S. military seal, as well as a “little” Japanese soldier who pales in comparison to the “big job” text.

Question 1: What do you think the purpose is for the creation of each image? How are they similar and/or different?

Question 2: For images 1 and 2, do you think the creators were purposeful with their use of symbols? What stands out?

Question 3: How are images 2 and 3 similar to each other? What do they accomplish, whether good or bad?

Students will be able to examine the historical contexts that influenced the creation of three World War II primary sources.

Students will be able to compare World War II primary sources that relate to discrimination and segregation in the armed services.

Question 1: I think the purpose behind the creation of each image was for military recruiting. This is easily seen in image 1, as reflected by the U.S. Army seal in the upper-left corner. Essentially, this poster aims to stir fear and hysteria among young recruits who were led to believe they can make a difference. In image 2, Japanese American soldiers of the 442nd Regimental Combat Team are portrayed in a positive light, which contradicted the dominating anti-Japanese hysteria of the time. Many Japanese Americans of the 442nd Regimental Combat Team were volunteers from internment camps, so this photo could have been used for recruiting purposes to show how Japanese Americans could “prove themselves” loyal. Similarly, image 3 could have been purposed to recruit African Americans into the military. The image portrays a strong and young African American man living an exciting life as an MP officer (hence the pose with the motorcycle). Compared to what most African Americans experienced during this time, this image could be seen as a way for African American men to earn prestige and “prove themselves” in a similar manner to image 2.

Question 3: Images 2 and 3 portray minorities who were often stigmatized serving in the armed forces. Both images reflect the segregation of the armed forces since in image 2, only Japanese Americans of the 442nd Regimental Combat Team are shown, and in image 3, the sign in the background distinguishes the MP officer as belonging to a segregated MP unit. Both images portray usually-stigmatized minorities in a positive light, but there are features of segregation that appeal to dominating notions of racism.

6 Replies to “Demonized, Yet Weaponized”