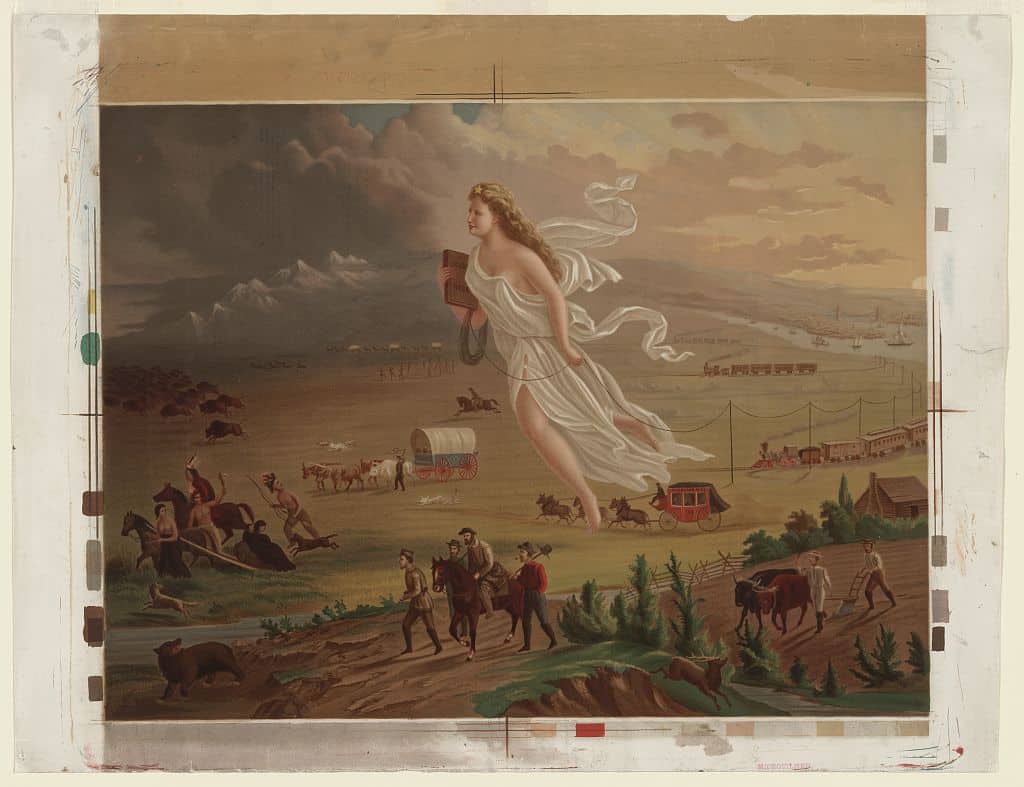 Context: The print shows Uncle Sam and Columbia (male and female representations of the United States) standing at the entrance to the “U.S. Foundling Asylum” as a basket of crying children labeled “Puerto Rico, Cuba, Hawaii, [and] Philippine” is presented to them by arms labeled “Manifest Destiny”. Within the walls of the asylum are four children labeled “Texas, New Mexico, Cal. [and] Alaska” playing together.

Icebreaker: Caption writer: Analyze the image. Does it contain a caption? Does the caption help understand the image? Create a new caption for the image.

Student response: The caption is: Uncle Sam “Gosh! I wish they wouldn’t come quite so many in a bunch; but, if I’ve got to take them, I guess I can do as well by them as I’ve done by the others!”

The caption helps understand the image because it lets you know that The United States (represented by Uncle Sam) is reluctant to accept these new territories as part of the US but plans to assimilate them into the majority culture and believes that this will lead to happiness for them. This is shown by the babies that represent the new territories crying and the ones already assimilated playing happily.

A new caption could add a response by saying: Columbia: “Well Sam, this is the price of spreading freedom and democracy around the globe.”

Context: This print shows Democratic candidate and general in the war of 1812, Lewis Cass with cannons for limbs and a sword and spear as he lists territories for expansion.

Icebreaker: Symbols: Analyze the image. Are there any Symbols? In what context do they fit in? What context would make them confusing? Do they hold up today?

Student response: In his right hand, Cass holds a sword labeled “Manifest Destiny” which combines the idea of American’s god-given right to expand into new lands with the means by which this is accomplished, violence. This symbol fits the context of the presidential election of 1848 because its goal is to make people believe that Cass’ expansionist leanings would lead the US into war. Because he is a former general in the War of 1812, this makes sense. This symbol would not fit the context if the idea of manifest destiny was not associated with violence and war. The symbol definitely holds up today because there are still examples of the US invading and occupying other nations. Although manifest destiny may not be spoken of as the driver.

Context: The print shows an allegorical female figure of America leading pioneers westward, as they travel on foot, in a stagecoach, conestoga wagon, and by railroads, where they encounter Native Americans and herds of bison.

Icebreaker: Bias: Analyze the image. What bias is present? Is the image arranged to create bias? Is there unintentional bias? Is there something in the image that is controversial today but not at the time it was created?

Student response: Showing the female representation of America as an angelic being creates an idea that westward expansion was a noble cause, which is biased from the perspective of Americans who were participating without considering the point of view of the native Americans. This is certainly an intentional bias but also may have been the honest belief of the artist. Since this print was created to promote that bias, I don’t see any unintentional biases. The whole idea of manifest destiny and that westward expansion was ordained by god was a commonly held belief at that time but is somewhat controversial today. I say that it’s only somewhat controversial because it seems to be widely regarded as a negative thing today and there is not much controversy about the evils committed during this era. Although Americans still enjoy the benefits of this belief even if we denounce the acts.