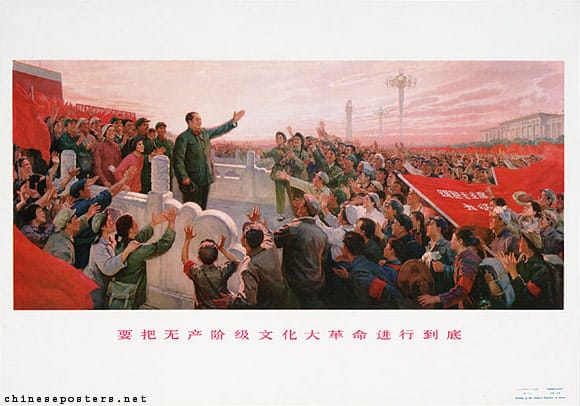 Image One: The Great Proletarian Leader

Context: This poster is from 1973 of Mao Zedong, greeting the Red Guard during the Cultural Revolution. It was created by artists that had come back from labor camps. The caption, “Chairman Mao’s heart beats as one with the hearts of the revolutionary masses.”

Bias Ice Breaker: Do you think this picture has a bias? Is it intentional or unintentional? What do you think was the artists intentions? Why do you think an artist would create an image glorifying Mao and the Red Guard after returning from a labor camp?

Student Response: I think this poster has a bias because maybe the artists were trying to prove that they weren’t anti-Mao, so they created art that showed Mao in a positive light.

Context: This poster is propaganda promoting Mao’s Little Red Book that contained quotes from Chairman Mao. The idea of this poster was “It is small and bound in a red plastic cover so you can always carry it with you. A good Red Guard knows the book by heart and rarely reads anything else.”

Questioning Ice Breaker: What questions do you have? What does the context contribute to this poster? What is going on in this poster? Is the person in the poster young or old? Does it matter?

Student Response: I wonder why this poster wants people to carry the book everywhere with them. It looks like it’s a young person, but he has that arm band which kind of reminds me of the Nazi’s so I think it shows that there is some group thing going on.

Context: This poster is of an imaginary scene of Mao Zedong and Zhou Enlai sitting in Tiananmen Square talking with Red Guards. It was created in 1977 which is after the end of the Cultural Revolution. The caption going down the side says that Mao and Zhou are together with us.

Anomalies Ice Breaker: What do you notice is weird/off about this poster? What surprises you?

Student Response: I noticed that this was created in 1977 which is just after the Cultural Revolution ended. I thought it was a horrible time period where a lot of people were hurt so I think it’s weird that this poster shows everyone all happy after something so bad had happened. There’s also fireworks going on in the background which makes it seem like they are celebrating something, maybe the end of the Cultural Revolution?

One Reply to “Propaganda from China’s Cultural Revolution: an icebreaker into red propaganda”