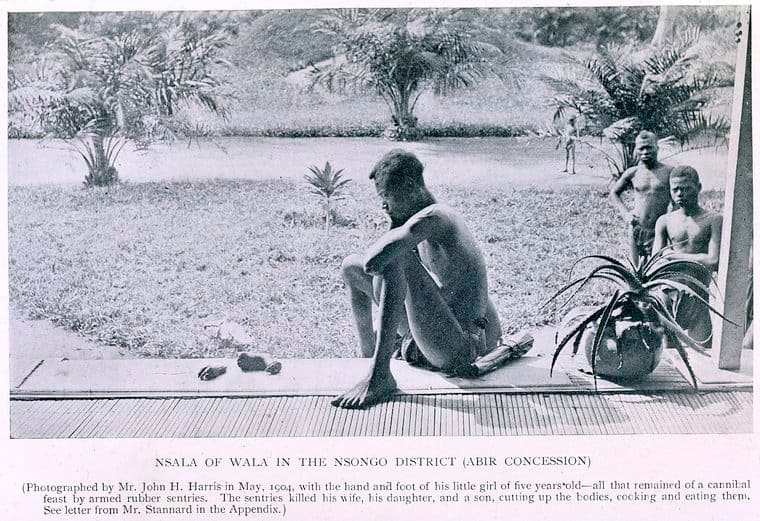 Background Information: Men of the Nsongo District (ABIR concession) with hands of two of their countrymen Lingomo and Bolenge murdered by rubber sentries of ABIR Anglo-Belgian India Rubber Company in May 1904. The two European men are Mr. Stannard and Mr. Harris of the Congo Balolo Mission at Baringa. This image formed part of the Harris Lantern Slide Collection. Under King Leopold II the Congo Free State used mass forced labour to extract rubber from the jungle for the European market. As consumer demand grew King Leopold II’s private army – the Force Publique – used violent means to coerce the population into meeting quotas, including murder, mutilation, rape, village burning, starvation and hostage taking. Alice Seeley Harris and her husband Reverend John H. Harris were missionaries in the Congo Free State from the late 1890s.

Background Information: This 1904 photograph is by Alice Seeley Harris, the man’s name is Nsala. Here is part of her account (from the book “Don’t Call Me Lady: The Journey of Lady Alice Seeley Harris”): He hadn’t made his rubber quota for the day so the Belgian-appointed overseers had cut off his daughter’s hand and foot. Her name was Boali. She was five years old. Then they killed her. But they weren’t finished. Then they killed his wife too.

And because that didn’t seem quite cruel enough, quite strong enough to make their case, they cannibalized both Boali and her mother. And they presented Nsala with the tokens, the leftovers from the once living body of his darling child whom he so loved. His life was destroyed.

They had partially destroyed it anyway by forcing his servitude but this act finished it for him. All of this filth had occurred because one man, one man who lived thousands of miles across the sea, one man who couldn’t get rich enough, had decreed that this land was his and that these people should serve his own greed. Leopold had not given any thought to the idea that these African children, these men, and women, were our fully human brothers, created equally by the same Hand that had created his own lineage of European Royalty.

The learners will evaluate the photographs along with their understanding of the time and place they were taken. The learner will explain their perspective on the intentions of the photographer and their access to the subjects.

One Reply to “Rubber Atrocities”