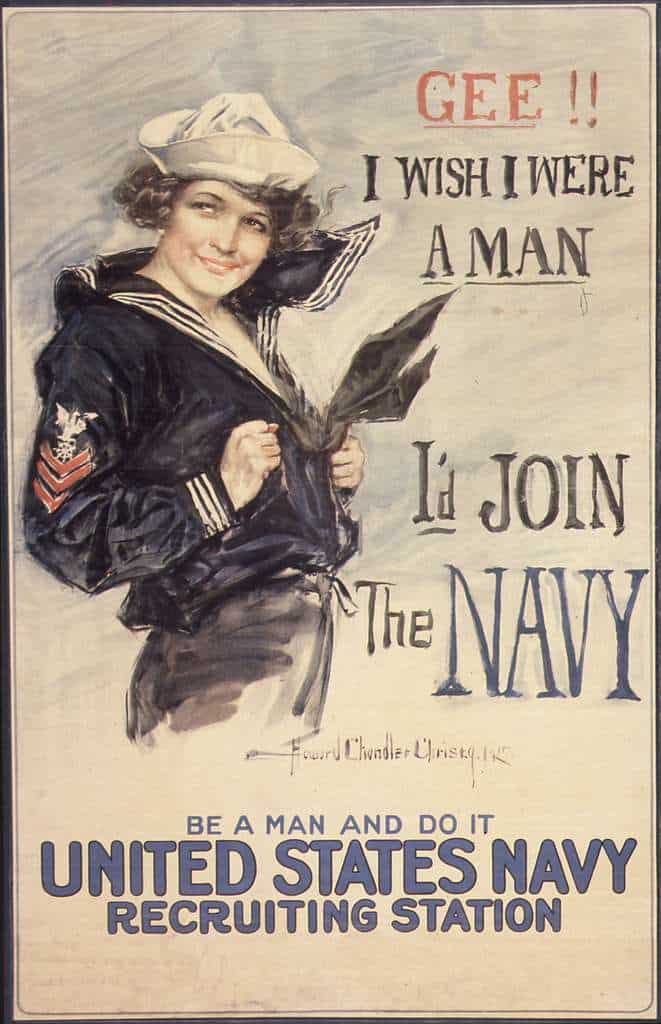 Background: During WWI and WWII posters were made both by the US government and private advertising agencies commissioned by the government in support of the war effort. The role of women changed dramatically during the course of these two global conflicts as the needs of modern warfare dominated the industrial landscape and millions were sent off to fight in theaters around the world. Women began to fill roles traditionally held by men; first in factories and businesses and then in the services themselves in support roles.

Question 1: What stereotypes appear in these posters and which are being challenged?

Question 2: Who is the intended audience for these posters?

Question 3: Why were these posters made? What can we say about the needs of the war effort and their impact on the American Workforce?

Learners will take their understanding of the time period and evaluate what is being expressed in these posters and photographs. The learner will explain through short answer responses on their perspective of what is happening in these images.

Response 1: In the first poster we see women being reduced to playing dress up and in a child-like manner exclaim that they want to be soldiers. The understanding being that it is ludicrous and unfeminine for a woman to be in the services, but she longs to contribute due to her patriotism. The real subtext here is that men should be enlisting in the war. That it is their duty as both Americans and as men to fight. In failing to do so their masculinity is being called into question. The next two images from WWII show how much has changed when it comes to women in the war effort. We see in the first image the perfect American war family; no longer is it the son’s duty to fight; but the daughter’s duty to enlist and do what she can. In the second image we see what a woman is expected to do; technical support work – using her knowledge to help the war effort – but not be in actual combat.

Response 2: The first poster’s expected audience is definitely for men who have yet to enlist. The overall tone of the poster is that men are needed to fight and if they fail to do so they are less masculine. It could be suggested that a secondary audience is patriotic women who could influence men they know to enlist. In the second poster the audience expands to men, women, and even older generations of parents. Older generations were needed to encourage and support their daughters in the war effort and that it would be a point of pride for a family to have their daughters join the WAC – Women’s Army Corp and other organizations. In the last image college educated women are the target audience. Their knowledge and expertise was needed as the war effort taxed the manpower of every sector of the economy and military organizations.

Response 3: Human resources during both conflicts were pushed to their limit. Modern warfare required millions of people to participate as soldiers, as laborers in factories and assembly plants, and to replace the millions of workers who enlisted. In WWI, especially in the beginning of the conflict, an isolationist America was averse to joining the European powers in their bloody conflicts, yet millions of troops were needed. In WWII human resources were taxed even more in line with the scale of the conflict. Women were needed to fill roles as there simply not enough men to do so. Practicalities of the war effort knocked down many stereotypes of women were considered capable of.

2 Replies to “In the Army Now: The Role of Women in the Services”