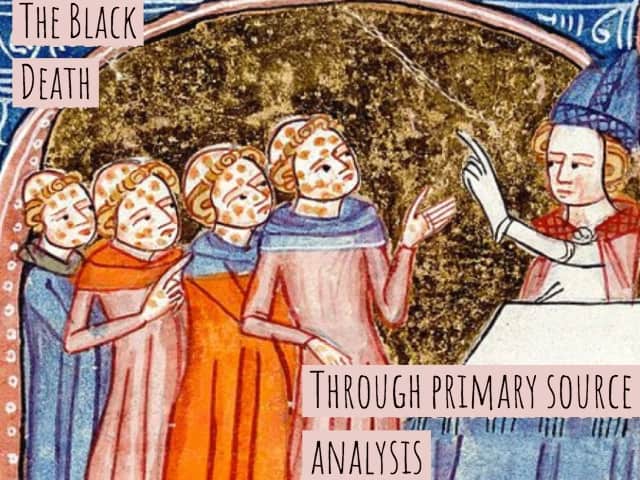 In today’s lesson, the class will read two primary source documents to examine  and question the diverse experiences during the 14th century Black Death. By using these two documents the students, by the end of the class will be able to answer:

“How did people understand the plague during the 14th century and did it reflect other fundamental  views of the time?”

Before this lesson, students will have prior knowledge will include understanding political, social, and religious aspects of the 12th-14th century, the background information of the plague (spread, cause, death toll) along with being able to pull out information from texts. After this lesson, students will be able to take their prior knowledge and use it to understand how the plague was experienced, how people tried to cure it, along with how the plague did encompass social, political, and religious aspects of medieval times.

To begin the class, students will define illness in groups of four. After  five minutes of small group discussion, I will open the discussion to the class. This question will then be followed by what students know about sanitation during the of the black death, which will be prior knowledge. I will do this so students begin to connect the dots that doctors in the medieval times did not understand medical treatments, which is a huge aspect of the plague. Overall, the first 15 minutes of class should be to get students thinking about modern-day illness’ and how different the experience would be in the 14th century.

Following our class discussion, students will either read the document individually, with a  partner, or as a group (with the teacher). The students will then work on highlighting and taking notes:

Depending on their mastery of compare and contrast, the students will work in specific groups (individual, partner, or group) to fill out the worksheet. The worksheet includes working on skills of contextualization, examining and questioning :

The key questions that students should be able to answer are:

Lastly, we will move to the key question of the day, “How did people understand the plague during the 14th century and did it reflect other fundamental  views of the time?” This will be a class discussion, where students should be able to examine their answers and question the  different perspectives, to come to the conclusion that the plague did affect political, social, and religious aspects of the time.

The class will end with a ‘exit slip’ where students have to write on a sticky note on the conclusion they came too from the day’s activity.

This lesson was fun to create but super new for me. I usually stick to more modern history (18th century-modern) so, I had to step out fo my comfort zone a bit. I found my inspiration for this lesson  on Stanford History Education Group and made it my own. As a whole, I think this lesson would be super fun to implement in my classroom because  students are able to work at their own pace and comfort zone.  I believe this lesson helps students reach a higher level skill of evaluating, without making it intimidating. At the same time, I am confident that students will naturally question their thinking during this assignment because the primary source documents have some pretty insane comments, which are beyond interesting. All in all, I had a great time creating this lesson and I believe it would be  very successful in a classroom.

2 Replies to “The Black Death- A Reflection of Political, Social and Religious Views during the 14th Century”