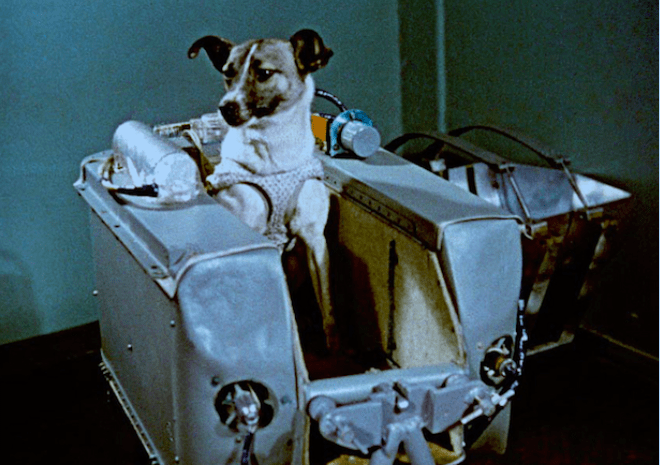 The Dog That Started The Space Race

Essential Question:
What were the reasons Laika was sent into space and what impact did it have on U.S. and Soviet relations?

Laika’s Journey to Space and the Cold War

Laika’s Journey to Space and the Cold War
Historical Documents: Discus the images as a class and their author’s perspective, place in history, and motive.
John Buckley 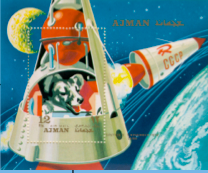 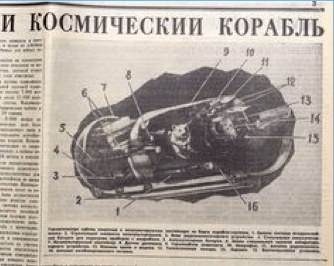 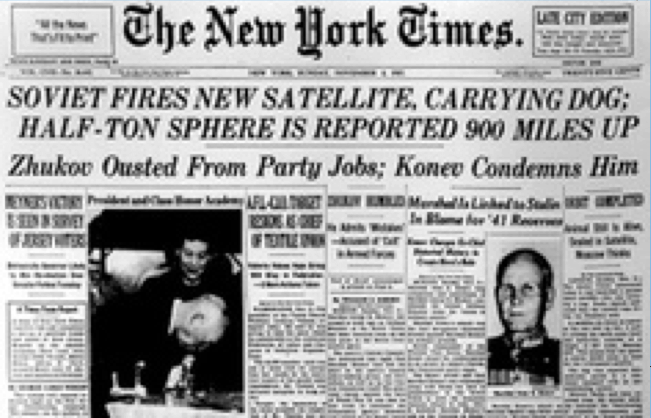 Laika on a Soviet Postage Stamp

Laika as a Cartoon Character Hero

Key Vocabulary Words
(To accompany article in worksheet form.) Discuss key vocabulary words as a class before having students break up into small groups to discuss the article and discussion questions.

Cold War: intense rivalry after World War II between the Soviet Union and its satellites and the democratic countries of the Western world, under the leadership of the United States.

Space Race: The competitive nature of the nations involved in space exploration.

Arms Race: Competition between countries to achieve superiority in quantity and quality of military arms.

Euthanised: To put an animal to death to end suffering or for convenience.

Depletion: The reduction in the number or quantity of something.

R–7 Sustainer: A key part of the Soviet Rocket.

ICBM: Intercontinental-Ballistic Missile, a rocket or missile type of missile that can fly from one continent to another
Source
Laika’s Journey to Space
*Give Students worksheet below to read and discuss in small groups.

“Laika 1954 – November 3, 1957) was a Soviet space dog who became one of the first animals in space, and the first animal to orbit the Earth. Laika, a stray dog from the streets of Moscow, was selected to be the occupant of the Soviet spacecraft Sputnik 2 that was launched into outer space on November 3, 1957.
Little was known about the impact of spaceflight on living creatures at the time of Laika’s mission, and the technology to de-orbit had not yet been developed, therefore Laika’s survival was not expected. Some scientists believed humans would be unable to survive the launch or the conditions of outer space, so engineers viewed flights by animals as a necessary precursor to human missions. The experiment aimed to prove that a living passenger could survive being launched into orbit and endure weightlessness, paving the way for human spaceflight and providing scientists with some of the first data on how living organisms react to spaceflight environments.
Laika died within hours from overheating, possibly caused by a failure of the central R-7 sustainer to separate from the payload. The true cause and time of her death were not made public until 2002; instead, it was widely reported that she died when her oxygen ran out on day six or, as the Soviet government initially claimed, she was euthanized prior to oxygen depletion.”
First Animals in Space

Discussion Questions
Scaffolding questions for students to use with documents:
1. Who made the video? When? And why?
2. Why did the Soviet Union want to send animals into space?
3. Was the United States alarmed about this event? And if so, why?
4. Did the event cause any fear or anxiety in United States? If yes, why?
5. If you were the Country’s leader, would you have sent Laika into space?
6. Did this event increase or decrease tensions in the Cold War between the U.S. and the Soviet Union?
Brief description of how the documents and scaffolding questions should reinforce the targeted historic skill(s)

This will allow students to discuss and grasp the background, context, and motivation of all parties involved. It will help students further understand the scope of historical events in proper framework.

Reflection:  As it relates to the SHEG lesson model, with this lesson I tried to focus on sourcing and  contextualization in the lesson design process. The challenges  I faced in preparing this lesson plan were making sure that the education piece is placed properly in the educational process. Meaning: The children would need some preparation work before hand concerning Space Exploration, Cold War, etc. etc. I do think it provides the opportunity to help intorduce 5th graders to not just a dog, but an opportunity to look “behind the curtain” of politics and world events and realize they are never exactly what they seem to be. Teaching historical thinking skills and critical analysis is essential in proper educational formation as they move towards adulthood.