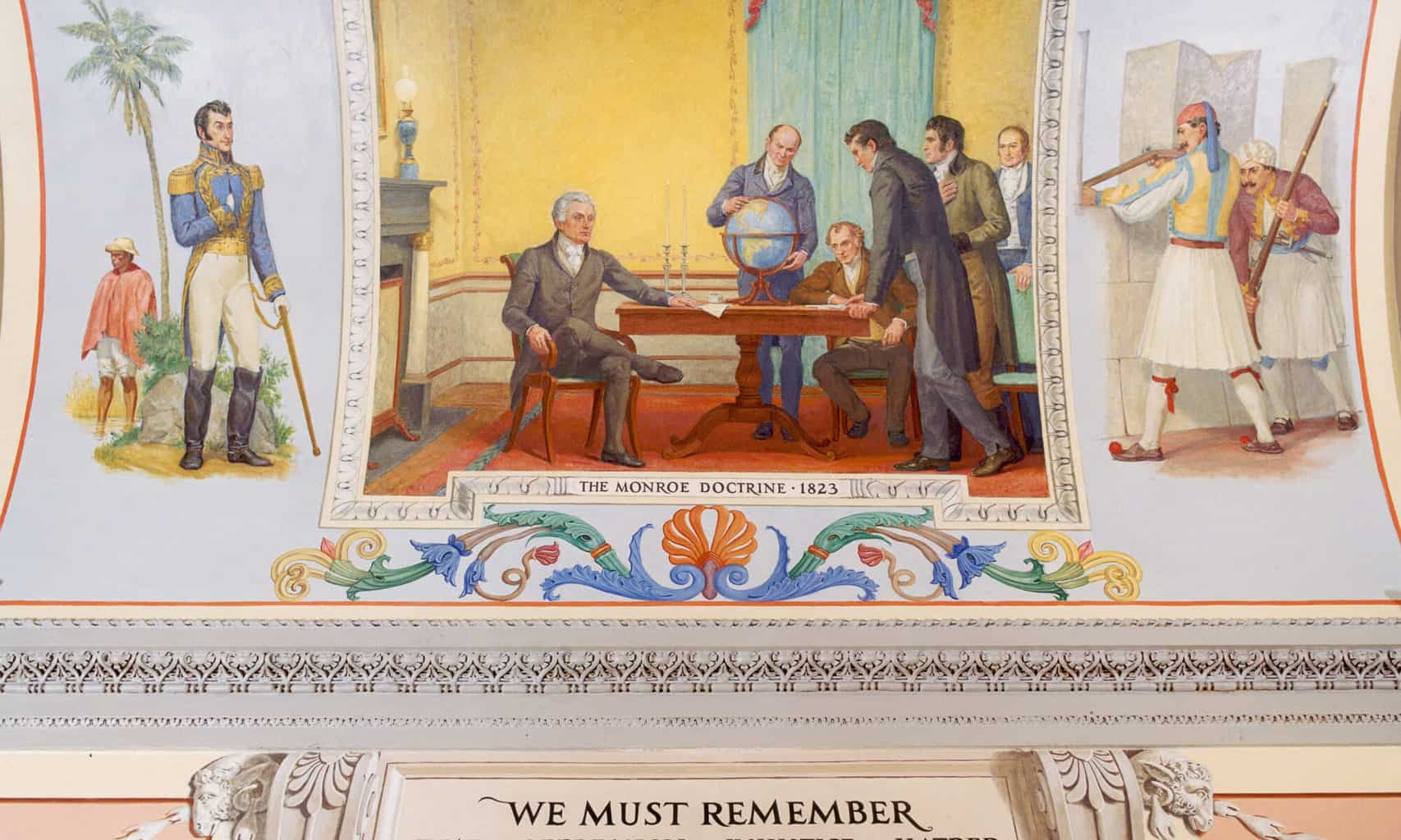 Title: Keep off! The Monroe Doctrine must be respected

Context: The illustration represents the United States (Uncle Sam as an armed soldier) preventing passage to European Powers (France, Germany, Spain, Britain, and Portugal) into the Western Hemisphere via the Bering Strait . A sign on North America reads, “No Trespass, America for Americans”. Uncle Sam is standing in front of Nicaragua and Venezuela.

Icebreaker prompt: Does the image present any symbols of significance? In what context do these symbols fit in?

Response: One symbol that is worth pointing out is the fact that Uncle Sam is the only person in the illustration holding a weapon. This demonstrates the United States’ willingness to act on nations that disagreed with the Monroe Doctrine.

Another symbolic feature of this illustration is Uncle Sam’s stance between European Powers, and Nicaragua and Venezuela. It appears that Uncle Sam is protecting the Latin American nations from European powers.

Context: The illustration shows Uncle Sam in a wagon full of United States citizens (children). The child to most recently have joined the wagon has a hat on labeled “Hawaii”. Uncle Sam is helping four girls labeled “Puerto Rico, Cuba, Phillipines and Ladrones” into the wagon. Two horses labeled, “Liberty” and “Union” are pulling the wagon. An old man wearing a hat labeled, “Monroe Doctrine” is sitting down nearby and asks Uncle Sam: “Ain’t ye takin’ too many in, Sam?” Uncle Sam replies, “No, Gran’pa; I reckon this team will be strong enough for them all!”

Icebreaker prompt: Brainstorm a list of questions and rank them in order of individual curiosity.

3.) Did the US aid Latin America in finding democracy?

Context: Caption at the bottom of the image states:

Uncle Sam – “The Monroe Doctrine will keep you from being kidnapped, but it won’t help you get our of your honest debts.”

Response: Uncle Sam thoughts: “I will stay true to my word and oppose European Colonization in the Western Hemisphere, however, Venezuela sure does owe me for this one”.

Venezuelan boy thoughts: “First Spain, now Germany? Who will exploit my people next?”

5 Replies to “The Monroe Doctrine: A Hypocrisy?”