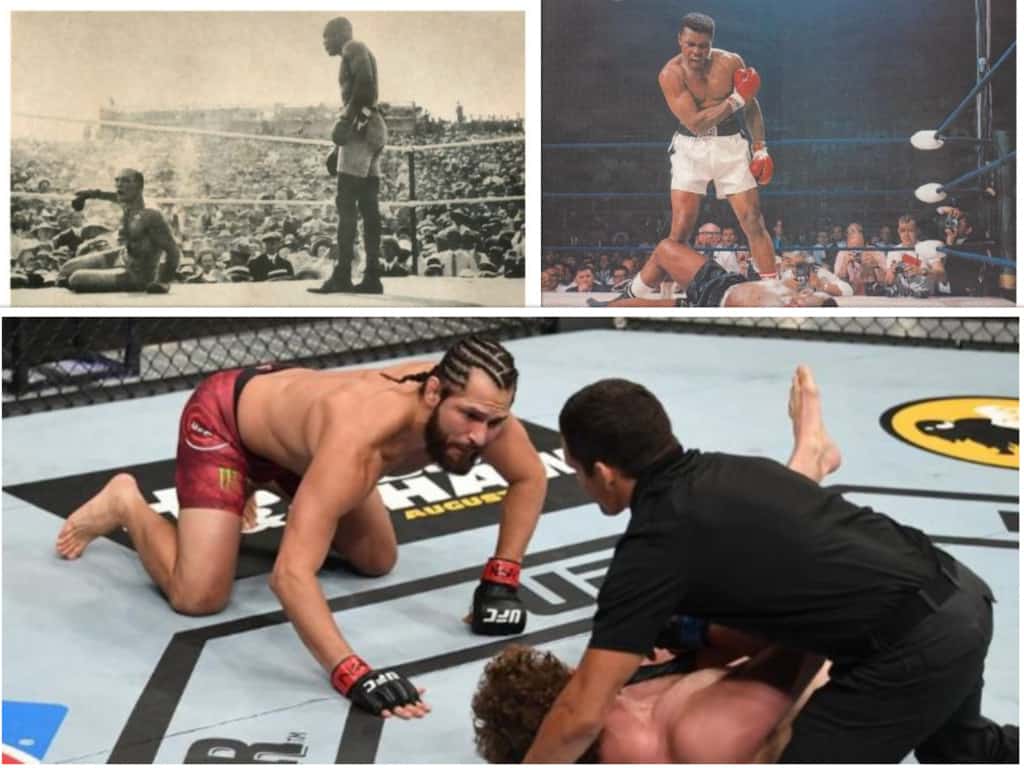 One of the first famous boxers in the United States was Jack Johnson, an African-American athlete with their reign of dominance taking place at the height of the Jim Crow period. His record was reportedly 74 wins, 13 losses, with a 1910 “fight of the century” against James J. Jefferies. Johnson stood against adversity to be a face of Sportsmanship in the century and an advocate for interracial marriage, before dying from a car crash in 1946 at the age of 68.

Johnson, who was renown as the greatest fighter in his era, faced a surprising knockout defeat against Jess Willard in 1915 that began his fall from dominance. Although the picture above is advertised as the fight between Johnson and Kaufman, further research into the subject leads me to believe that the Library of Congress had mislabeled the photo as Johnson v. Kaufman by mistake, which could be why the source claims 1910 and the photo has a 1915 copyright date. This discrepancy pairs alongside the other information I found to claim this as Johnson v. Willard instead, such as the Johnson v Kaufman fight not ending by Johnson getting knocked out, and the Kaufman fight taking place in 1910 while the Willard fight was a knockout loss for Johnson in 1915.

This photo represents the idea of “passing the torch” in Combat Sports, where one legend falls as another legend rises.

When the legends of a sport “pass the torch,” some traits of the elder are passed to the younger — In the case of Jack Johnson (19th Century) and Muhammad Ali (20th Century), activism was a trait passed on while Sportsmanship was a bit lost along the way! In this 1965 title bout against top contender Sonny Liston, Muhammad Ali once again shocked the world and silenced the many who doubted his capabilities.

Coloring of this photo, the boxing attire, and cameras in the audience signal the 1965 setting of Muhammad Ali’s knockout victory over rival Sonny Liston. This is arguably one of the most famous boxing photos in American history, and the image’s significance is only trumped by the significance of Muhammad Ali’s success playing a role in his major social justice contributions.

As the combat sport of boxing left it’s golden era in the late-20th century, legendary boxers became only niche specialists in the rising sport of Mixed Martial Arts where brutality, stylistic diversity, and showmanship became the core as a variety of fighting styles were mixed to create an entirely new sport. Torches were passed to modern Mixed Martial Arts from the glory days of boxing, however rivalries, ticket sales, and fierce competitiveness allowed the torch of “smack-talk” to pass with all fire still ablaze.

As the popularity of boxing began to decline toward the turn of the 21st century, another combat sport began to take center stage. Mixed Martial Arts, often seen as a much more violent sport than boxing due to the small gloves and inclusion of kicks, chokes, armbars, etc, boomed in popularity when Conor McGregor and his colorful personality rose to the top in dominant fashion. McGregor was known for his trash-talk, unbelievable knockout power, confidence, and abrasive personality, but (until fairly recently) always managed to walk the walk that he managed to talk. After compiling a series of wins and dominating the striking side of Mixed Martial Arts, Conor McGregor became the defibrillator Boxing needed to shock its dying popularity back to life. By approaching and challenging Floyd Mayweather to a pay-per-view boxing match, Mayweather being 49-0 and widely regarded as the greatest modern boxer, both MMA and boxing fans had uncontrollable excitement for the potential “fight of the decade” between experienced veteran and self-believing newcomer.

On August 26th, 2017 the bout finally came to fruition, and fans were torn on whether this would be a spectacle or a farce. Floyd Mayweather was one of the most tried and true professional boxers with a record unparalleled by anyone else in the sport’s modern era, and Conor McGregor issued this challenged with no prior experience with professional boxing. Part of what made the bout so exciting was the curiosity of fans to know whether or not McGregor could transition from one combat sport and dethrone the king in another. In terms of Sportsmanship, the theme of this article, it was few and far between leading up to the fight although both fighters claimed the drama to be “staged” and to simply “sell the fight.” This approach bred a new style of combat sports Sportsmanship, seemingly related to the “professional wrestling” game of faking the poor sportsmanship for the sake of a higher paycheck as opposed to disrespect for the opponent.

The success of Mayweather and McGregor in adapting staged professional wrestling drama to the atmosphere of actual combat sports was shown in the fact that Mayweather v McGregor brought in the highest revenue of any boxing bout in American history. Both fighters earned over $100 million from the August 26th bout alone, and Mayweather in particular made a groundbreaking $275 million. After the fight ended with Mayweather beating McGregor by attrition in less than 10 rounds, both fighters had an entirely different outlook on each other that was demonstrative of great sportsmanship — a sharp contrast from the “beef” they shared leading up the the fight.

Poor sportsmanship is still seen in combat sports, whether it be Mixed Martial Arts or Boxing, but the evolution of sportsmanlike behavior has adapted to the needs of modern society. Modern society enjoys drama as observed by television shows such as “The Real Housewives”, “Jersey Shore”, or “Keeping up with the Kardashians”, and drama can be a voucher to redeem for significant amounts of revenue. Sportsmanship in Combat Sports is now taking the road that the WWE has taken for decades upon decades: Build up drama, draw in viewers that want to see a resolution, and “save face” by emphasizing sportsmanship when a fight is over to show the disrespect was not real. This formulaic method, as shown by the infamous “Mayweather v McGregor,” boxing bout, is a surefire way to have modern-day athletes fill the societal need for drama while smiling and laughing with their opponents afterward as they take their money all the way to the bank! 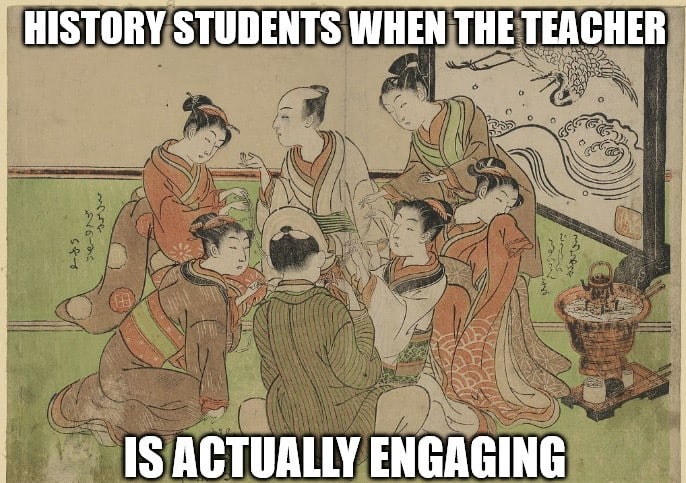 Although I made this meme with History/Social Studies in mind, it could just as easily apply to any subject taught in school. Something I’ve learned through both experience teaching and experience as a student is that nothing causes me to try harder in a class than having an engaging instructor. Anyone, or at least almost anyone, can sit in a classroom for hours and complete the busy work necessary to pass. Not everyone can sit in a classroom for hours while absorbing and retaining information to apply again later, though. There are classes I have passed with an A that I could tell you nothing about, and there are classes I have passed or struggled to pass where I can remember almost all of the information. The big difference between my retention in these classes is the amount of engagement my teachers have been able to get from me. Engagement is hard to measure in a tangible way, but I’ve learned that you can simply feel engagement in a class when it is present. Much like in the image/meme, you may not be able to gauge a quantitative measure of engagement from students, but there is almost a qualitative feeling or vibe (apparently a word my students said was completely antiquated) you can sense from students that enjoy being with you in class.

My biggest dilemma in doing a write-up about this meme surrounding engagement in education is that I honestly, truly, have absolutely no clue what actually makes a teacher engaging. There are ideas I have, such as relating to the students, using humor, and treating them like intelligent people rather than children to be babysat. Many of the best teaching traits, as I’ve heard, are not learned in a classroom but are learned through years of experience in the field — I think student engagement is one of those traits. When I eventually become a teacher there are so many traits I need to refine, but finding a way to consistently engage my students and give them a desire to be in class will be the holy grail of my career to search for!