For this project I was initially looking into portraits and family photos from the late 1800s, and intended to explore what differences there were between how white and blacks were posed and portrayed. However, I soon realized that while this topic was interesting to me, I would be limited in the amount of documents there were. Furthermore, I was struggling to come up with questions to go along with these photographs. I knew that I wanted to do something with photos though, and that got me searching for a new topic. This new search led me to the photo below, which immediately captured my interest. 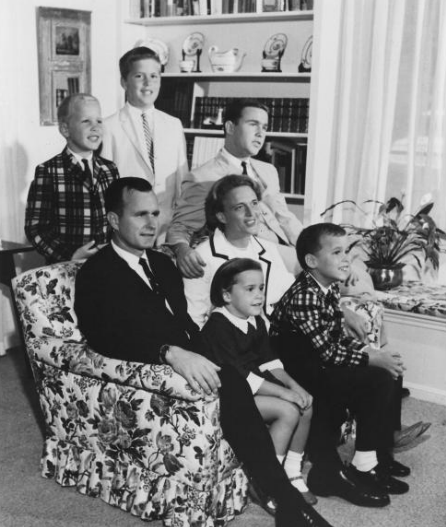 The George Bush family in 1964 in Houston

Accompanying this photo were an assortment of other family photos of George H.W. Bush’s family, and diplomatic meetings that his wife Barbara conducted. From there I saw photos of other First Families and First Ladies, and I was hooked.

For example, we have the following photo of Barbara Bush and Raisa Gorbachev together in 1990. If someone did not know who these two women were, they likely would assume that they were two good friends, rather than the wives of the leaders of nations that were coming to the end of an unspoken war. Why were they both chosen to give this address? What was to be achieved by depicting the two as being so comfortable around each other? It should also be noted that the school at which they spoke, Wellesley, is an all-female college. What importance should be attached to this? 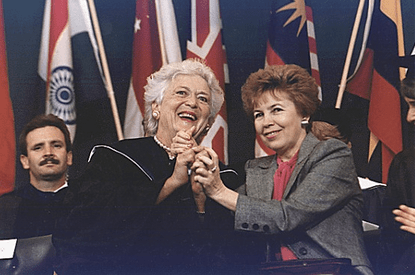 Mrs. Bush and Raisa Gorbachev give the Commencement Address at Wellesley College

I am not going to have any problem finding photographs that I could use for this project. If anything, I am going to struggle with narrowing down what era the photographs should cover, and which are the most important. I need to decide if I want to work with families that were in power back to back, or if I would prefer to have a gap, to show how things changed over the years. During our critique session in class, I got the suggestion to look into First Family equivalent photos from other countries, which is a great idea that I have not explored yet. Again, this will raise the problem of having too many potential documents to work with.

2 Replies to “First Families as an American Ideal”