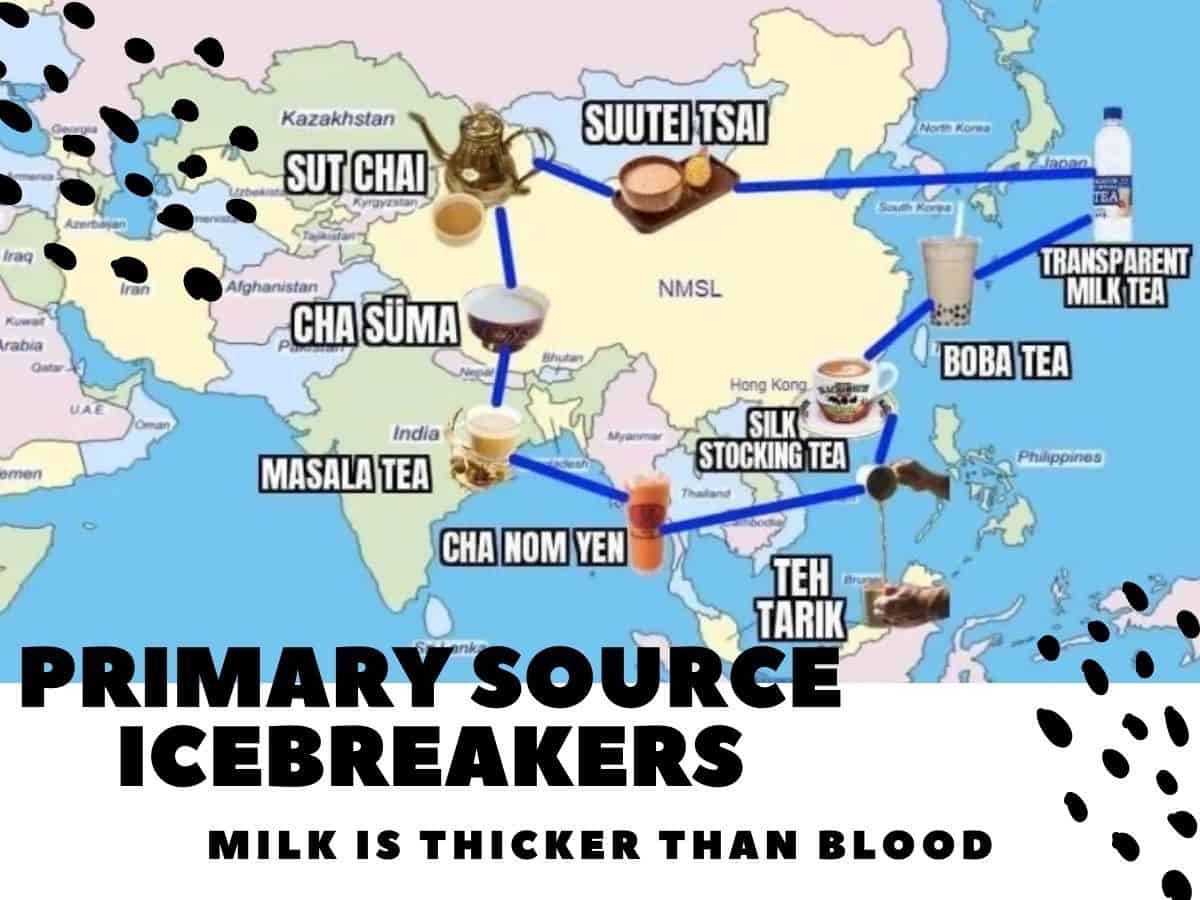 The Milk Tea Alliance is an anti-Beijing meme and online democratic solidarity movement. The three original members of the virtual alliance are the Taiwanese boba tea, Hong Kong-style milk tea and Thai tea.

Context: Joshua Wong and Nathan Law – both pictured above – are two of the most well-known revolutionaries in modern Hong Kong history. They were both sentenced to prison for sedition and unlawful assembly in 2017 when Wong was just 20 years old. The two spearheaded the Demosisto, a group of young Hong Kongers fighting for education reform and the semi-autonomy they were promised by China in 1997. In 2018 they won a Nobel Peace Prize for spending their adolescence protesting for political reform and for their efforts in protecting the autonomy and freedoms guaranteed to Hong Kong in the Sino-British Joint Declaration. A large resurgence of Hong Kong Protests came in mid-2019 with the introduction of the extradition bill.

Ice Breaker Prompt: Write a speech bubble for what the U.S. Representative is saying into the microphone in a sentence of two and then a thought bubble for Wong.

Response:
Democratic Representative Eliot Engel says: These two men have devoted their young lives to politics and fighting for freedom. Young Americans should look up to these two as examples of how to enact and fight for change in a broken system.
Joshua Wong thinks: Don’t worry Engel, I foresee young Americans having their hands full with all sorts of domestic injustice in the coming years.

Context: On January 11th, 2020, Taiwan had its 7th democratic election for president. Democratic elections for president began on the island in 1996 and since then its been a battle of two main party’s; the Democratic Progressive Party (DPP) and the Kuomintang (KMT). In the graph above the DPP candidate and incumbent, Tsai Ingwen is represented by the green line and dots while the blue represent’s the KMT’s Han Guoyu. The DPP platform is ultimately trying to continue Taiwan’s slow but steady democratization and further itself from China by establishing a Taiwanese national identity. The KMT is generally favorable towards the ‘one county two system’ idea and has closer ties to China. The Chinese government greatly prefers the views of the KMT and actively promotes KMT candidates.

Ice Breaker Prompt: Analyze the graph. What questions do you have? Why might there be a shift halfway through 2019? Why did the Taiwanese people choose Tsai Ingwen?

Response:
The shift seems to coincide with the Hong Kong Protests. Taiwanese people might have seen the punitive, destructive practices of China and decided that they no longer wanted to support the party that favors China. What was Han Guoyu’s agenda and what was he saying and doing in the months leading up to the election? Did he condemn police brutality in HK?

Title: A Winnie the Pooh toy used to symbolize Xi Jinping with the Chinese flag on it, used in the 1 December protests

Context: In online culture Winnie the Pooh is used to symbolize Xi Jinping. Xi subsequently censored the use of Pooh on Chinese internet. It also appears that there is a Chinazi flag stuck on Pooh. Hong Kongers use the swastika to liken China and President Xi to Germany and Nazi’s because of their imprisonment of Uighur Muslims.

Icebreaker Prompt: What are the symbols in the photo? What context would make them confusing?

Response: People on the internet have claimed Xi looks like Winnie the Pooh for years. The swastika is representative of how China has concentration camps as Nazi Germany once did. The U.S. flags confuse me however; where is this protest taking place?

6 Replies to “Primary Source Icebreakers Through the Milk Tea Alliance”