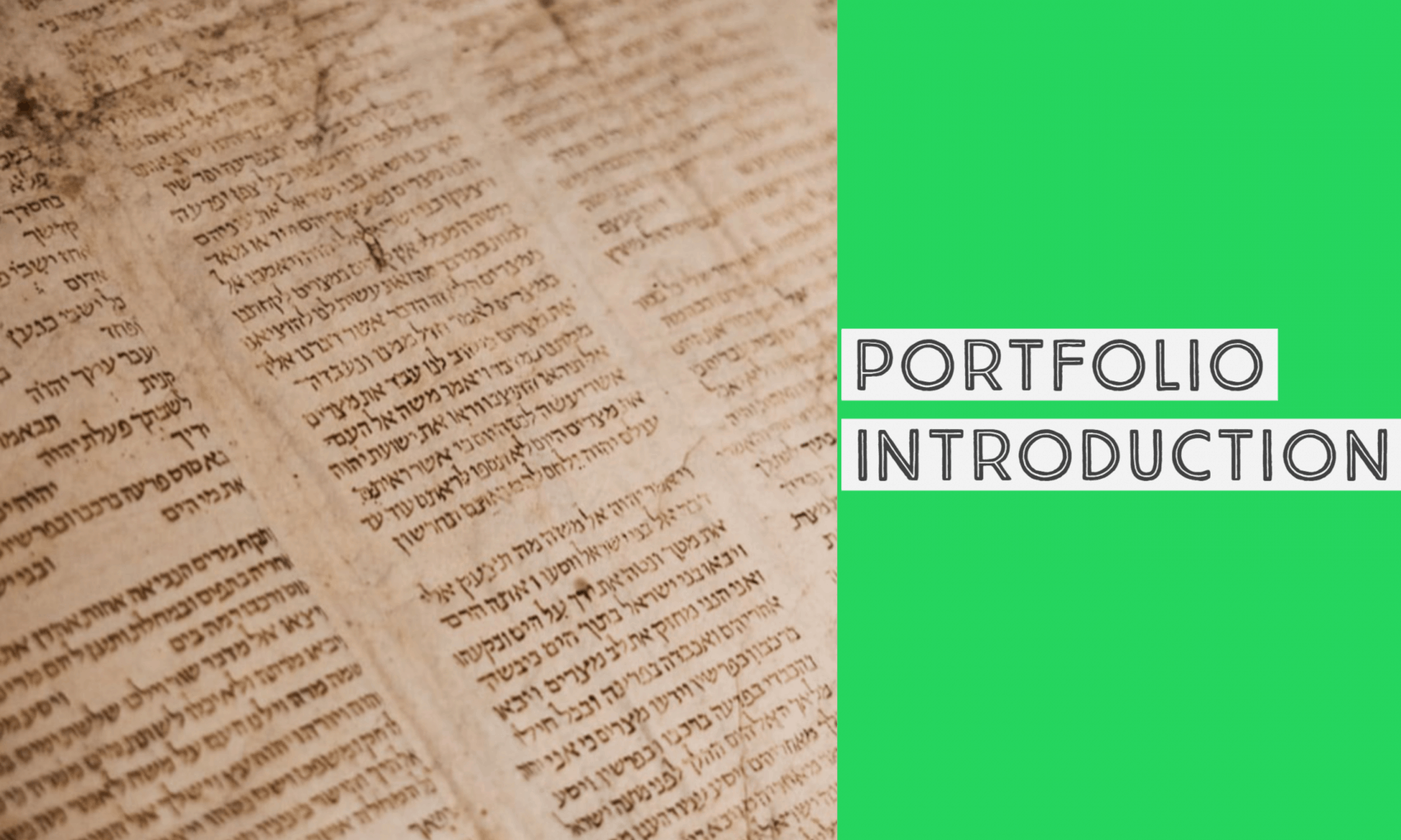 When asking my peers of their history education background, I tend to get one of two drastically different answers. Some respond positively, speaking of how they love to read and discuss their findings in a classroom setting about historical topics and themes they are passionate about. Others perceive learning history as tedious, or even worse, irrelevant. Pointing to their own experience of memorizing names, dates, and events in order to get the “A” on the test, those with a negative perception towards learning history fail to see the relevance of studying the field.

I myself was once one of these people who saw learning history in a negative light. Entirely focused on the grade, I didn’t understand how studying stuff that already happened could be beneficial. This changed entirely my 3rd year in high school, when my teacher introduced me to a way of studying history drastically different than what I’d experienced in the past. I learned history through living in it, diving into primary sources and understanding what life was like for the people I had previously read about in the dry and boring excerpts from my textbooks. I no longer remembered facts; I now took a stance on topics that while they remained in the past, still somehow seemed timeless.

My love of history grew so much from that period that I, one who once dismissed history as interesting but useless, devoted myself to becoming a high school history teacher during my freshman year of college. I knew I had to prevent students from going down the path I once walked down; I had to make history fun, interesting, and most importantly, relevant and meaningful to my students.

I knew textbook question and answers was not something I was going to rely upon, but how would I exactly accomplish my goals of making history fun, interesting, relevant, and meaningful to students, especially those who already had poor perceptions towards history as they entered high school? The answer as an idea was simple, however more complex in execution: I would allow my students to become the historians.

This idea somewhat shocked me. How would my students be able to transform into historians? What would my place as the teacher be in all this? As someone who favors organization and order, I did not know how allowing my students to be the drivers of their education would play out in reality. Regardless, I had to try.

My first attempt at this new approach to teaching is detailed in my post “Thinking Like a Historian“. Merging technology through a google forum with a primary source document, I made my first attempt to allow my students to become the historian. Placing proper scaffolding questions to assist my students who needed the help, they were now in charge of their learning, and I was there to help them along the way. However, this was just used as a small activity within a lesson. How would I create an entire lesson, or better yet, an entire unit centered around this approach to history?

In my most recent work, I’ve attempted to construct an entire lesson devoted to learning about WWI through posters from the era. Titled “World War I Through Posters“, students learn about key ideas about the “Great War,” such as how the nature of this conflict differed from those of the past. Students learn about the vast social change in the world that stemmed from this conflict, key historical ideas such as “Total War”, “Propaganda”, and “Nationalism” through this lesson. Instead of a textbook providing them the information about these key topics, the students discover what these terms mean themselves through analyzing WWI primary sources. They then get to live in the time period by constructing their own WWI era poster utilizing techniques they’ve observed from the primary sources they’ve examined.

While I have not tried out this lesson yet, I plan to utilize it during my instruction of my first WWI unit next semester. With greater trust in my students to guide their own learning made possible by my increased ability to construct effective, student led lessons, I aspire to be a history teacher that makes learning history fun, interesting, relevant, and meaningful for all of his students. 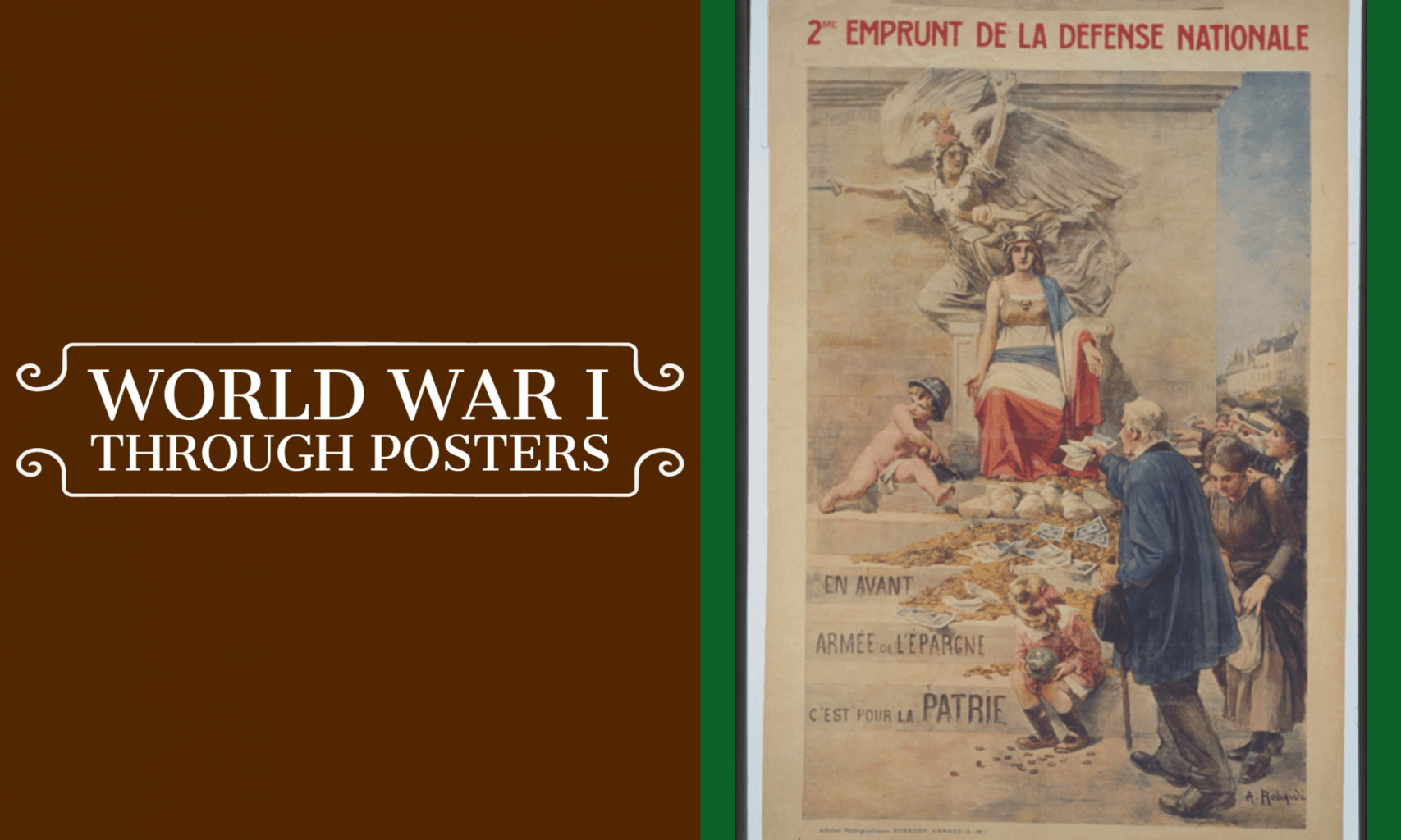 Essential Question: How did both allied and central powers utilize posters to increase support for war efforts during WWI?

In this lesson, students will be analyzing posters from both sides of WWI to gain a better understanding of the Great War. Students will look at sources individually, utilizing close reading, contextualization, and sourcing skills to gain a better sense of the historical content of each poster and determine how these posters appealed to the public. In addition, students will analyze posters in groups, looking for patterns between the posters in order to gain a sense of the trends utilized by poster makers to increase support for the war efforts.

Background Information: World War I was a conflict from 1914-1918 that involved many nations throughout the entire world. Known as “The Great War” during the time, the conflict introduced new horrors and realities of war due to technological advancements in equipment the Allied Powers (France, Great Britain and the Commonwealth, Russia, and the United States) fought the Central Powers (Germany, Austro-Hungarian Empire, The Ottoman Empire). This war was significantly different than previous conflicts in human history, providing new challenges to nations in their efforts to garner support for the war effort by their entire populations. Below is a short video introducing the primary causes for the start of World War I.

One way in which “The Great War” differed from past wars was the extent to which civilians were involved in the WWI. Analyze the four primary source documents below and answer the guiding questions.

Question 1: In what ways were civilians asked to help in this conflict according to these posters?

Question 2: How would this help aid the war effort according to the posters? How might this aid from civilians changed the tide of the war in reality?

A term coined by World War I historians to characterize this changing nature of war was the idea of “Total War”. Analyze the four posters below, and answer the follow on questions.

Question 3: What might the term “total war” mean using evidence from these posters?

Question 4: How were roles changing for specific groups in society as a consequence of “The Great War?” Why might that be? Give examples from the posters.

Many countries used symbols to help rally support for the war. Look at these posters below, and answer the follow on questions.

Question 5: Why might have war supporters used posters to help garner support for their cause?

Question 6: Are symbols like the ones used in WWI still used today to help rally people to a cause? Give an example.

Activity #4: Portrayal of the “Other”

In addition to gaining support for the war, both the allies and the central powers looked to depict the enemies of their nations in negative ways, as displayed below. Analyze these posters, and answer the questions below.

Question 7: How did poster makers utilize imagery to depict other nations?

Question 8: Why might such a tactic have been so effective during wartime?

WWI was a war that changed not only the political landscape of Europe and the entire world, but also the way in which war was perceived and fought. In order to address this changing way in which warfare was conducted, nations had to appeal to their countries in innovative and different ways than in the past. A nation could no longer rely on a section of their population to win their country’s wars; instead, a reliance on the entire populace became necessary for all powers if they hoped to win the “Great War”. With this extreme reliance came a drastic social changes for all parts of world.

Concluding Activity: Utilizing techniques poster makers used during WWI, make your own WWI era poster. Ensure you have an image and text within the poster that display a point of view that would appeal to a certain segment of a population. You may choose to make a poster for any power involved in “The Great War”. 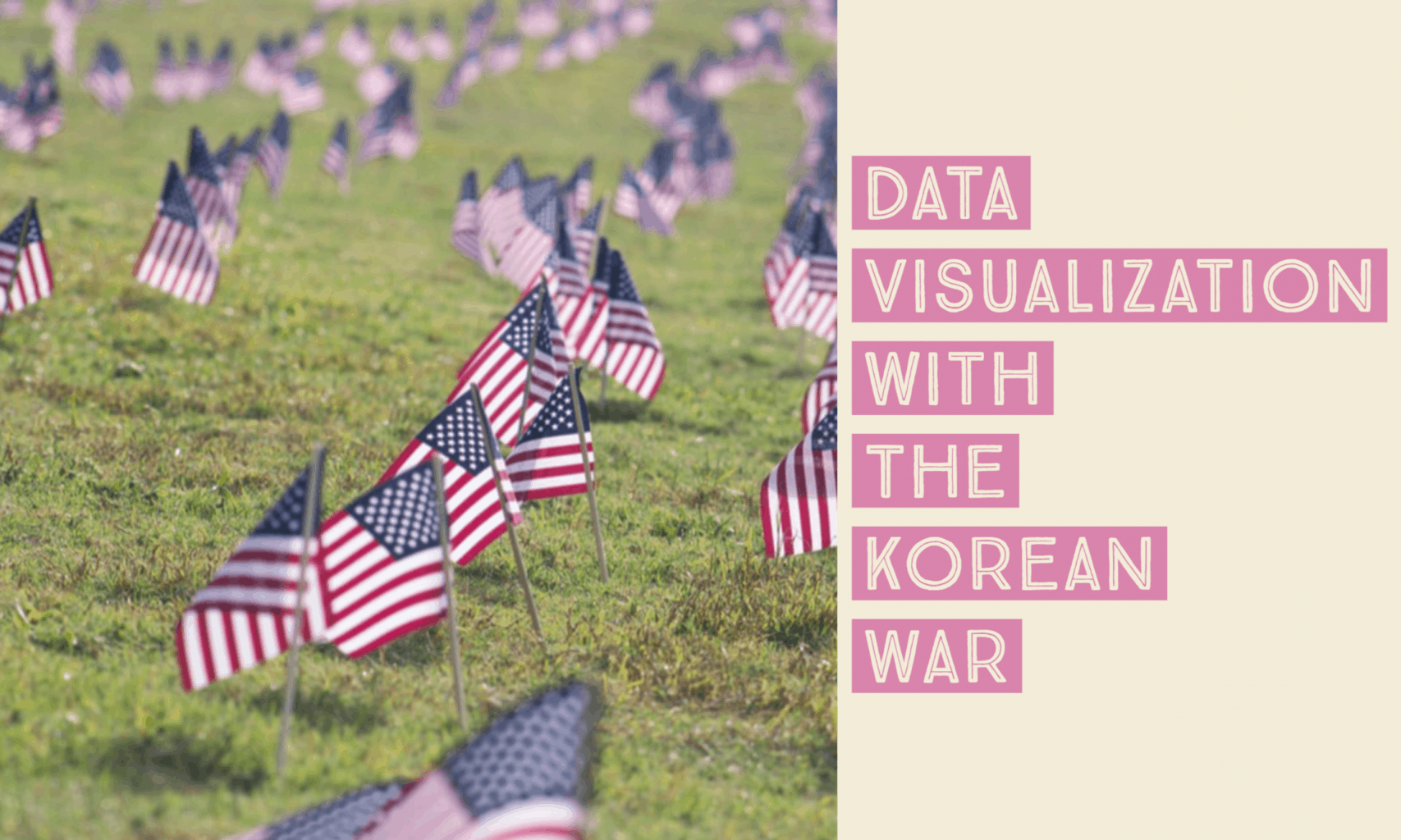 “Chronicling America” is an extremely valuable tool educators can utilize in their classrooms for a variety of lessons. This subsection of the “Library of Congress” allows users to sort through a collection of digitized American newspapers from as early as 1789 to as late as 1963 with many ways to filter results. While the time limitations do restrict the user from exploring aspects of history outside of America during 1789-1963, the website nonetheless provides excellent value in allowing students to analyze primary source documents when utilized correctly.

One idea I have for using this tool is a lesson for a beginning portion in a Korean War unit. Known as the “Forgotten War”, students would utilized primary source documents to determine how the general public interacted with and perceived the conflict. Due to the large number of filters, students could see how public perception towards the conflict changed from early on in the war (using the filter to only view newspapers during the years 1950 and 1951), in the later years of the war (1952 and 1953), and the students could even discover if perception towards the war was different based on the state (using the tool to isolate certain state newspapers). Below is a screenshot of a filer setting that would look at the entirety of the war, including the aftermath with the year after the war included, of the entire nation (did not isolate the search to one state).

While this is a large endevor for any single student, I would likely pair up students into groups of three, where each group would be responsible for the three following activities: 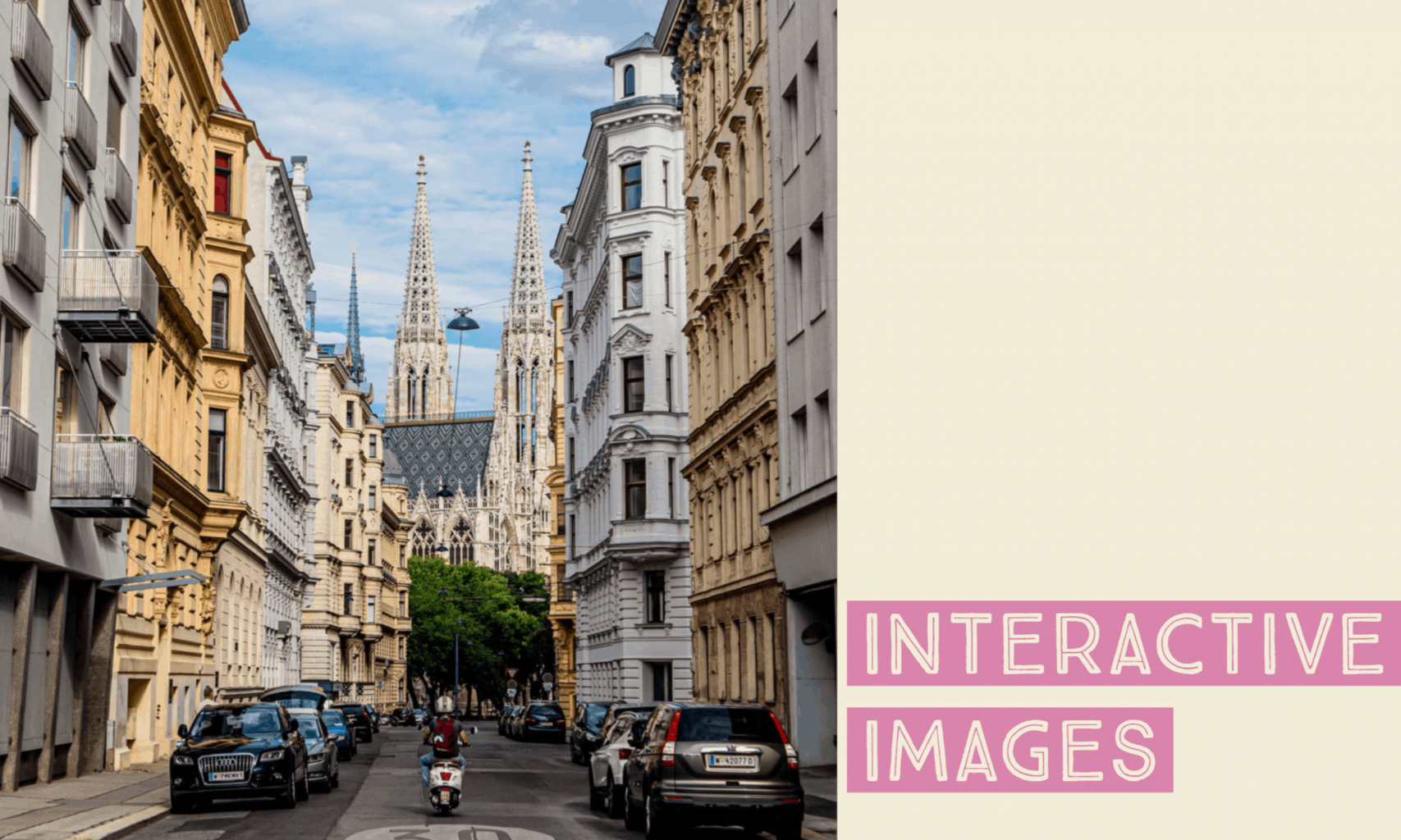 Below is an interactive My Maps I’ve created on google maps. It includes key destinations of places in Vienna that I’d want to visit to gain a better historical understanding of Austria, specifically the Hapsburg Monarchy and the Austrian Empire, as well as some places that seem like fun as well.

What I’d want my students to do is plan their own trip to anywhere in the world using google My Maps, where the destinations they choose to visit would help them gain a historical understanding of the political and social background of a certain city or location. They would be given my My Map of Vienna as an example for how to complete the project, where they’d need to include both a picture and a description of the historical value the place gives to them if they were to visit the place described in their assignment.

Implementing such an assignment would help increase engagement within the class, as students could choose their favorite place or favorite historical event that they’d like to visit. Being able to map out their trip to gain a better historical understanding of a place is a fun alternative to a simple lecture, and students would be channel their creativity and personnel interests to better utilize their historical skills in a fruitful and fun manner.