Advice to Future Self on Undertaking a DBQ Project: 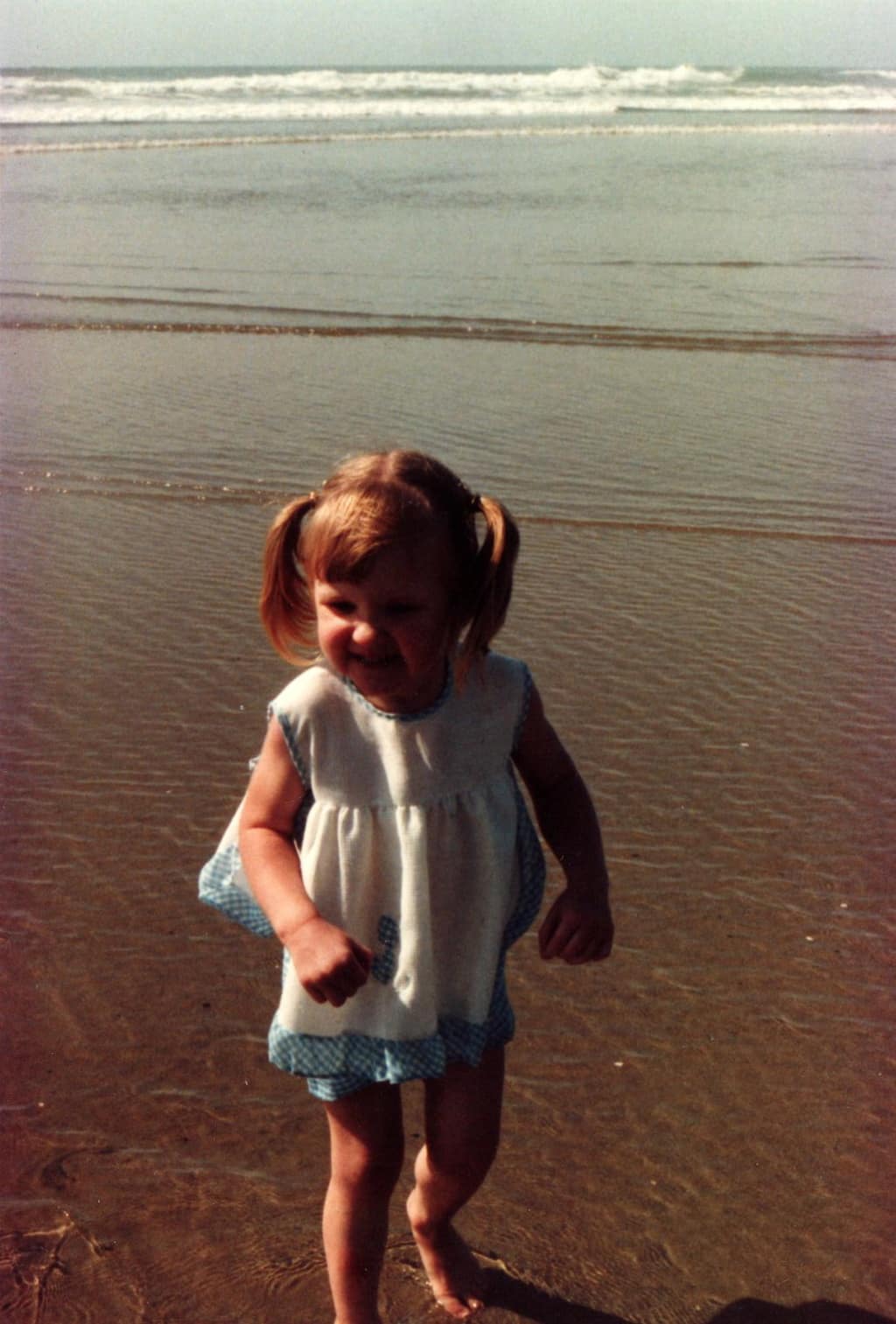 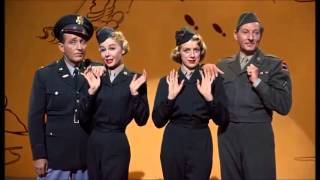 “Gee, I Wish I Was Back in the Army” by Irving Berlin

In 2006, I was riding in a friend’s car down a major thoroughfare in the town in which we lived. We had grown up down the street from each other, had both entered the Army, and had recently ended up as roommates. On this day, a large group of protestors had gathered in the parking lot of a large grocery store near a major intersection. The messages on their placards enraged my friend, who had served in Kuwait, and she rolled down her window to engage in a less-than-friendly conversation with the protestors. One sign in particular grabbed my attention because it stated that soldiers should come home where they belonged, and not be off fighting in a war. What on earth do they think soldiers do? I wondered. War is what we train for, it’s why we spend weeks on end at the range perfecting our marksmanship skills, it’s why we study land navigation and push ourselves to our physical limits during training. It’s not what we want to do, but it’s what we are prepared to do on behalf of our country. How could they say they support soldiers without an awareness of what soldiers do?

I had forgotten about this memory until I began working on a topic for a DBQ project. Initially, I was interested in exploring the theme: What is American manhood? However, after spending time sharing ideas with my fellow classmates, I honed in on a slightly more specific theme to explore: Who is the American soldier? Some of the related questions that came to mind were:

As a veteran of the United States Army Reserve, I believe I am uniquely qualified to address this line of questioning. I am well versed in military jargon and familiar with the structure of Field Manuals and other TRADOC (training and doctrine) materials. I am neither embittered or in love with the U.S. military. I also remember many of the early sources of my own information on what it means to be an American soldier. It is an image created from Ernest Hemingway’s A Farewell to Arms, Neil Simon’s Biloxi Blues, and Irving Berlin’s White Christmas. It is an idea informed by Alfred Eisenstaedt’s photograph of a sailor kissing a nurse in Times Square and John Filo’s photographs of Ohio National Guard troops firing on student protestors at Kent State. It is a picture that first formed after watching an Army advertisement on television as a small child, when I misheard the lyrics, and thought that the happy faces of young soldiers were being accompanied by a song that said “be all that you can be, you can lose your life in the Army,” and wondering if the soldiers in the ad knew what lie in store for them.

As I begin assembling this project, I don’t have an established answer in mind. My plan is to follow the documents to see where they lead. Thus far, I have found a wealth of sources related to popular culture, in the form of movies, songs, articles in Time magazine, and Disney and Looney Toons animated cartoons. I plan to explore political cartoons, newsreels, speeches, and newspaper articles. I have not set a specific time frame, but there is such a plethora of documentation for the twentieth and twenty-first centuries that it may be extraneous to include the Revolutionary War, the American Civil War, and the Spanish-American War.

Use the source information, your knowledge of history, and the video and political cartoons to answer the questions below.

Document A is an animated short film written by Theodor Geisel (Dr. Seuss) and P.D. Eastman and produced by Warner Bros. for the War Department as part of the U.S. Army Air Force First Motion Picture Unit. Documents B, C and D are political cartoons created by Dr. Seuss for PM, a New York City daily newspaper.

Document A:  Private SNAFU in Rumors

Question 1: When was the film produced?

Question 2: Which two of the facts below might help explain why the author wrote this screenplay? 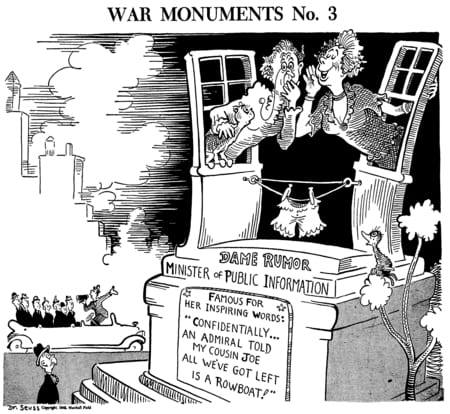 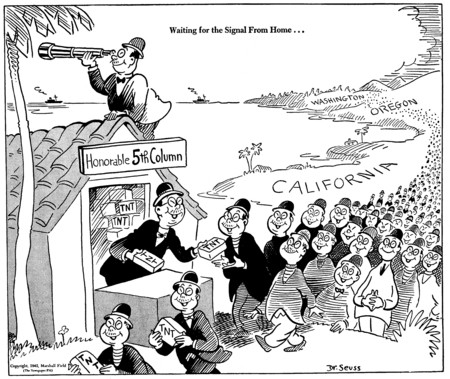 Document C:  Waiting for the Signal from Home, published February 13, 1942 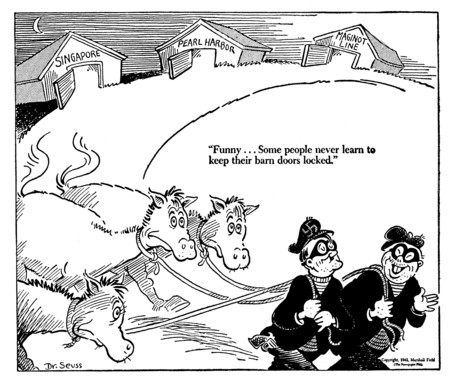 Lesson Goals: Students should be able to situate the film and the political cartoons on a timeline of World War II events, primarily around the bombing of Pearl Harbor (December 7, 1941) and President Roosevelt’s issuance of Executive Order 9066 (February 19, 1942). Students should recognize the difference between making an animated film for enlisted men in the military and drawing political cartoons for the general public. They should also note that the message of the cartoons and the film are quite similar, but the difference in the intended audience has an effect on the context.

Reflection:  This was a fun project. It seemed to me that it should have been a more difficult task to assemble a lesson on primary sources using a medium that was new to me (Google Presentation), but the Stanford History Education Group’s assessment model was so clear that this lesson came to together almost effortlessly. In fact, it came together so well I thought I must have done it incorrectly, or left something out. My thanks to Sam for thoroughly examining my first draft and offering his insight and support. This is the kind of lesson that makes me feel like I am doing what I am meant to be doing, and moving in the right direction.

Document A, Private SNAFU in “Rumors,” is now in the public domain. http://www.youtube.com/watch?v=ZGP7GebzO_E 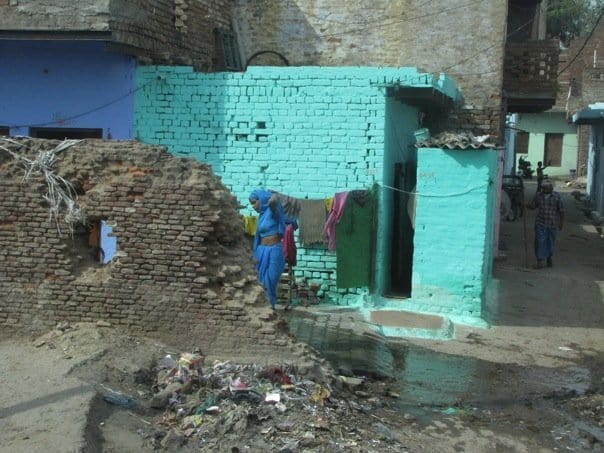 The following is a lesson study for part of a 10-lesson unit on ancient India that I will be teaching in October. For the purpose of my work sample, I will likely focus on Hinduism, the caste system, the life of Prince Siddhartha, and Buddhism.

Lesson Study (The Life of Siddhartha)

Ss were assigned a reading in advance of the lesson: chapter 16 from History Alive! They were also instructed to make a chronological list of what they believe are the most important events that occurred in Prince Siddhartha’s life.

Curriculum: Ancient India: Buddhism: The life of Siddhartha Gautama. This lesson will serve as a precursor to a lesson (or two) on Buddhism.

Ss will share their list of what they believe to be the most important events from the life of Prince Siddhartha (IW), first with a partner (PW). Then as a class (CW), we will compile one master list of the scenes the Ss believe are the most important to know/cover, as well as how many Ss need to be in each group, and what roles need to be played. Ss will then create tableaux to illustrate the life of Prince Siddhartha in groups (GW; the same # of groups as our agreed upon list of life events).

Tableaux: In small groups, Ss will create tableaux scenes (one per group) highlighting the pivotal moments/main events in the life of Prince Siddhartha.

Formative assessment of their performances in the tableaux, participation in the class conversation, and their individual lists of the important events in Siddhartha’s life.

What kinds of thinking will students need to do to participate in the lesson?

Evaluation: what were the pivotal moments in the life of Siddhartha?

Demonstration/illustration (kinesthetic): how do I show this event clearly through a visual scene created with my body and the bodies of my fellow group members?

To what extent do students have options or choices regarding these lesson components?

Ss get to help create the list of “scenes” (important moments in Siddhartha’s life) that will be performed in the tableaux, and Ss have to decide (in small groups) how to demonstrate/show their scene.

Initially, I did a lesson study on the entire ancient India unit, which is the document I brought to our peer review session.  It was important to me to explore everything I wanted to cover. However, the lesson study format turned out to not be the best method for me to explore these options. To fit an entire unit on one page, I had to pick and choose from various threads of thought, which contributed to a lack of cohesion in the document. My thanks to Andy for supporting my use of visual and kinesthetic activities and encouraging me to continue in that direction. My thanks to Erik for helping me focus in on what topics I really want to address and providing follow-up peer review support.

Image: “Lady in Blue,” taken by the author in New Delhi, India, in October 2009. Available on Flickr.