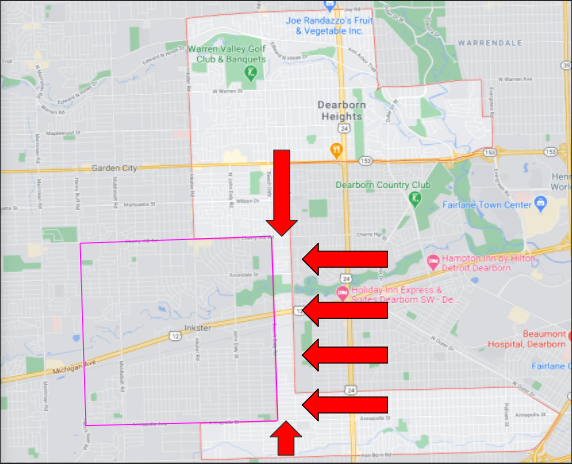 Fig. 1. Present-day map of Dearborn Heights and Inkster that indicates the boundary in question. From Google Maps, boundary of Inkster and red arrows added by me.

Fig. 2. Same map as in fig. 1, but with markings to show what Inkster would look like with its older boundaries in relation to Dearborn Heights. From Google Maps, boundary of Inkster added by me.

The boundary of Dearborn Heights appears to be a scattered mess when in actuality, this boundary was meticulously crafted to exclude African Americans and include the whiter portions of Dearborn and Inkster. The African American community of Inkster had a significant portion of their village annexed for the creation of Dearborn Heights in 1960. Understandably so, many Inskter residents were outraged over the annexation. The annexation was fought in two court cases, the first of which, Inkster v. Board of Supervisors, challenged that the annexation was statutorily illegal. However, a lower Michigan court ruled that the annexation of Inkster was legal because of the following clause in the Michigan Home Rule City Act:

This vote was held for people to be included in the incorporation of Dearborn Heights. Because of this, the vast majority of Inkster residents were shut out of the vote since the proposed boundary for Dearborn Heights included portions of Inkster that had lower African American populations. Also note that Inkster was a village during this time, so it lacked the same protections and guarantees as cities; had Inkster had cityhood, the annexation would not have been possible. The vote resulted in the northern part of Dearborn to not be incorporated into Dearborn Heights, but it included the southern part of Dearborn along with an annexed section of Inkster. Racial motivations aside, the annexation by itself was legal since people within the territory proposed for Dearborn Heights’ incorporation were able to vote on the matter.

Despite the ruling of Inkster v. Board of Supervisors, another lawsuit was filed. However, the new lawsuit challenged the annexation on constitutional grounds rather than statutory grounds. This led to the emergence of Taylor v. Dearborn in which the plaintiffs argued that the city boundary plan for Dearborn Heights was segregationist and intended to create an all-white city. “Taylor” in Taylor v. Dearborn is named Thomasina Taylor and she was a resident of Inkster who was known for community involvement. Although Taylor does not take part in Inkster v. Dearborn, her work after this ruling gave rise to Taylor v. Dearborn.

Similar to the outcome in Inkster v. Board of Supervisors, Taylor v. Dearborn ruled in favor of the incorporation of Dearborn Heights, thus keeping the annexation of Inkster intact. The plaintiffs argued that the annexation violated their 14th and 15th Amendment rights because the boundaries for the incorporation of Dearborn Heights was predominantly white; the part of Inkster that was annexed also had lower concentrations of African Americans. This is indicated by the below figure of Inkster taken from Mapping Inequality (this map is from 1939).

The part of Inkster that is marked in red is described as “Almost entirely occupied by negroes”, while the upper half mentions “It is doubtful that this area will improve greatly in view of the poor reputation of Inkster”. The upper half mentions nothing about race, while it is a major focus in the lower half. This indicates that more African Americans lived in the lower half of Inkster in the 1940s. This trend continued in the 1960s and is corroborated by Eugene Black, a Justice who sat on the Michigan Supreme Court for both Inkster v. Board of Supervisors and Dearborn v. Taylor. In his opinion for Taylor v. Dearborn, Justice Black acknowledged “The heaviest areas of Negro residence are in the southwest quadrant of the village, and in the westerly half of the southeast quadrant thereof west of Bayhan.”

What Justice Black was saying was saying is that most African Americans living in Inkster lived predominantly in the southwest quadrant and in southeast quadrant, but west of the street called Bayhan. Note that the above map is a pre-annexed map. Below is the same map, but showing the boundaries of Inkster after the annexation.

Between Justice Black’s statement about most African Americans in Inkster living west of Bayhan (again, indicated by the gray line) and corroborating data from Mapping Inequality, the portion of Inkster annexed to incorporate Dearborn Heights included areas with the lowest concentration of African Americans in Inkster. With this information in mind, it becomes clearer that the incorporation of Dearborn Heights was indeed racially motivated. Due to the Michigan Home Rule City Act, the annexers could have annexed even more land from Inkster, but the only land left to annex would be further west, and the further west you head in Inkster, the more African Americans there are. The annexation of Inkster was a blatant redline that was made possible by institutional racism since even Justice Black, who acknowledged that the annexation included very little African Americans in the boundaries of Dearborn Heights, was not racially motivated.

Effects of the Annexation

Google Maps’ “measure distance” tool was to used to find the above numbers for my calculations.

Same map as before, but the grayed portion indicates the land lost from the annexation. From the 1940 Census National Archives, gray rectangle added by me.

Information about Inkster v. Board of Supervisors obtained from Nexis Uni.

2 Replies to “A Two-Pronged Effort to Stop Redlining in Inkster, Michigan”