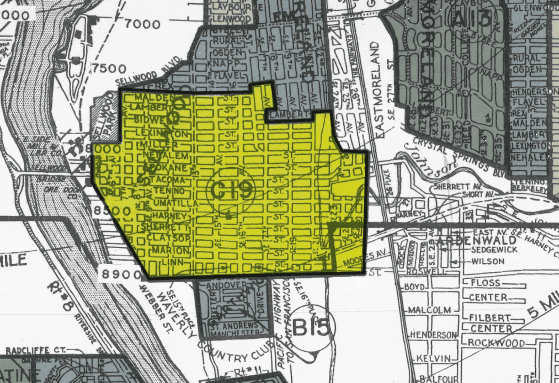 My family tree goes back many years in Portland and the neighboring Oak Grove on both my mother and father’s sides. For the purposes of this project I focused on my maternal grandfather’s family and the way the Great Depression affected their financial situation, speculating on how it may have related to HOLC Loans.

Living in Sellwood neighborhood, outlined as area C-19 on the Mapping Inequality: Redlining in New Deal America, my great-grandparents were in a “middle yellow” neighborhood. Sellwood was an area characterized by its “age and obsolescence,” but also had a high percentage of home ownership and “remote level of infiltration,” with 10 percent foreign-born families.

In the 1940 Census I was able to find more information about my great-grandparents and grandfather. At the time Clyde Newstrum was 41 years old, his wife Valentine was 38, and my grandfather Richard was nine. At the time he was in third grade, attending the same elementary school I would go to many years later. My great-grandfather Clyde worked for a collection agency, and my great-grandmother Valentine made about $5.00 a week working at a local bakery decorating cakes. Although Valentine made $300.00 in 1939, she was not listed as having a profession or career on the census, which I can only imagine is because of the stigma against women working outside of the home at the time. Coming out of the depression of the decade prior, in the 1940 census Clyde was listed as making no income, likely because as a collector during the the past decade there was probably not a lot of money to be collected. Their home, built in 1926 according to Zillow, was owned and cost $3,500.00.

One thing that also surprised me about the census information, was Valentine not identifying as an immigrant. Valentine was born as one of 18 children in Quebec, Canada to parents who immigrated to Canada from France. In later years, during the Korean War, my grandfather Richard served stateside as a Lieutenant, advanced through the ranks because of his Masters in Fine Arts. After being approached for a special project, he was later rejected due to the immigration status of his mother. It’s possible that Valentine did not know she wasn’t born in Oregon, and later in life she did achieve citizenship with the help of my mother. It could also be possible that she chose not to identify as an immigrant due to the unfavorable societal view of immigrants.

The HOLC loans were intended to assist people purchase homes after the Great Depression of the 1930s. This system of state-sponsored loans, however, led to racial discrimination in the form of redlining, or classifying different neighborhoods into favorable or unfavorable based on the amount of immigrants and people of color in the area. HOLC loans were often denied to people of color.

I’m not sure if my great-grandparents were in a position to need to take a loan on their home, but I think that if they were, they would likely have been able to secure one. They had a demonstrated need according to the 1940 census, and although my great-grandmother’s status as an immigrant should have counted against them, white immigrants from Northwestern European countries were seen as more desirable candidates, mostly because of racist stereotypes.

2 Replies to “HOLC Loans in Portland’s 1940 Census: Investigating the Effects of the Great Depression on My Family”