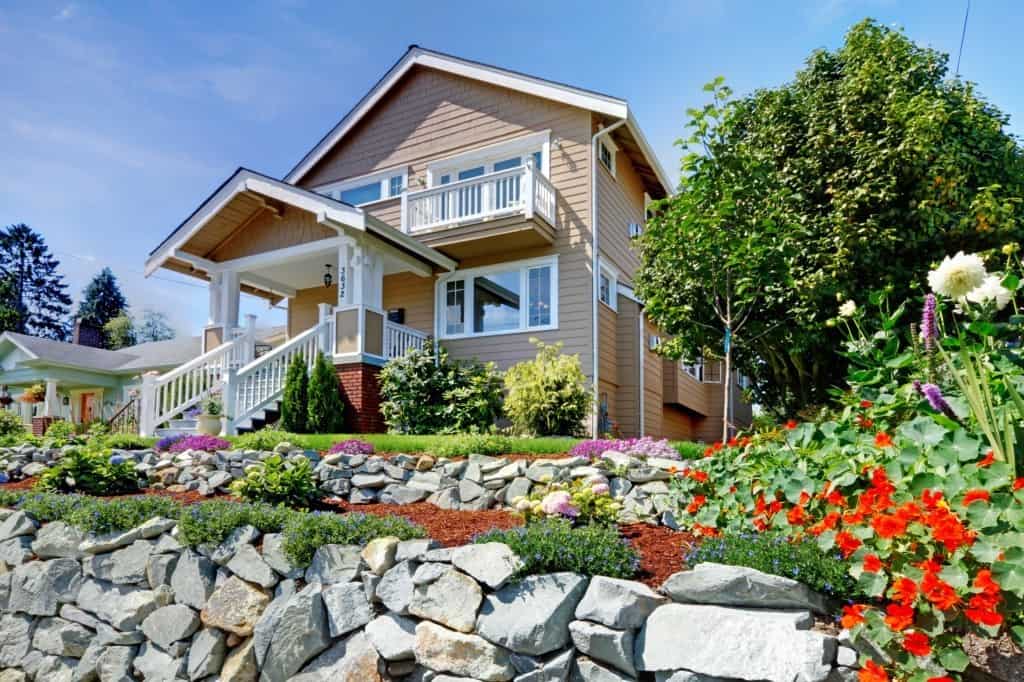 When I first opened up the “Mapping Inequality” website, I was excited to see my hometown of Tacoma, WA and immediately opened up the following maps.

I started zooming in on the different neighborhoods and I began hunting for my street. I was surprised that I was quickly able to find the exact outline of my house (marked below with a red star) and I was also intrigued to learn that the dividing line between the A1 and B1 neighborhoods went down the middle of my street, putting my house on the blue side by a matter of feet.

I find the progression of green, to blue, to yellow interesting because I think it lines up really well today with property value in my neighborhood. The closer you get to the Puget Sound (the white area on the map) the more the price of your home goes up, and as you drive away from the water the condition of the houses noticeably deteriorates in a matter of blocks. The legacy of redlining can definitely be seen around Tacoma, while green areas like the A1 “Laburnum Park” district pictured above are predominantly white, red areas such as the D5 district pictured on the first map known today as “Hilltop” have dramatically higher minority populations (although nowadays Hilltop is also suffering the impacts of gentrification). While I found all of this to be fascinating, things got even more exciting when I decided to rewind eighty years and see what I could learn about the history of my house in 1940.

The red star on this map shows my block in the year 1940. Knowing that my house was clearly included in the HOLC’s appraisals, I decided to hunt for my address in the 1940 census. After inputting my street and then our cross-street, the census website still gave me 32 pages of results. I almost didn’t go through them, but as I started sifting through I started to recognize street names and addresses and I began to be able to tell what order they were going in. I finally found my address on the very last line of page sixteen.

I immediately recognized the last name “Rosenberger” and that my parents have mentioned we are only the second family to live in our house. I called my mom and she began telling me everything she knew about the history of the house, going back to a woman named Elma Rosenberger. I realized that Rollin Rosenberger’s family was probably listed on the next page, and when I flipped to page seventeen, sure enough I found Elma Rosenberger and their two daughters, Elma and Gretchen. They can be seen on the first three lines of this page.

From this census information and everything I was able to gather from my mom, here is the story of the Rosenbergers, the former inhabitants of my house in the North End of Tacoma, Washington.

Rollin Rosenberger was born in 1883 in Iowa and attended college for one year. He got married to Elma Rosenberger, who was born in 1886 and had a high school education. The two of them decided to move to Tacoma, Washington. When they were expecting their first child, they decided to buy a brand new home in Tacoma’s North End to prepare for their growing family, which cost them $3,500. The house was finished in 1911, the same year that they welcomed their first daughter, Elma, named after her mother. It’s a good thing the house was finished because rumor has it that Elma was born right on the kitchen table. When Elma was four years old, the Rosenberger’s added another member to the family, their youngest daughter Gretchen. The daughters went to school locally and graduated from Stadium High School.

The Rosenbergers had been living in their home for just shy of thirty years when the 1940 census came along. All four members of the family still resided there. To me, it appeared that Rollin’s occupation states “proprietor grocery store.” Sure enough, the obituary I found for Rollin’s daughter Elma confirms that he owned “Rosenberger’s Grocery” on Market Street. Rollin’s wife Elma as no occupation listed, although she likely helped Rollin run the store. Their daughter Elma also has no occupation listed, but their daughter Gretchen was a secretary. In the year 1940, Elma would have been 29 and Gretchen would have been 25 and they were both noted to be single.

While Elma has no occupation listed, my personal connection to the Rosenberger family helps fill in some of the gaps. As noted before, Elma was 29 and still living at home, this was because she never got married. Her sister Gretchen did however, she married Ferd Bondy and went on to have three children, Richard, Bruce, and Patricia. The Bondy family attended St. Luke’s Church, the church that my family and I attend, and today there is a room off the parish hall named “The Bondy Room” after Ferd and Gretchen. While Elma was a loving aunt to her nephews and niece, she did not start a family of her own. She remained in the house she was literally born in while she worked by serving as the organist at St. Andrew’s Church and teaching piano lessons in the living room of her home. My uncle, David Bishop, and his father, Don Bishop, also attended St. Andrew’s as a family and they both remember the Rosenberger and Bondy families well. My uncle remembers both Elma’s as “Mrs. Rosenberger” and “Ms. Rosenberger” and even recalls going to Ms. Rosenberger’s house for Jr. Choir lessons, during which they stood around the big piano in her living room that was filled with sheet music. Elma would go on to inherit her lifelong home from her parents, and she lived there for the rest of her life until she passed away at age 94.

The house was left to Elma’s nephew, Bruce. Bruce decided to renovate the home and retire there. As Bruce finished up the renovation and got into his 60’s, he was getting ready to settle in and spend the rest of his life living on his own in his family home, just like his Aunt Elma had. Then, Bruce very unexpectedly met the love of his life, Laura. They soon got married and decided to move in together, so Bruce made the tough decision to put his family home on the market.

This is where my family and I come into the picture. After Bruce put the home on the market in 2012, we went to a showing and decided to put in an offer on the 1911 craftsman. We remained in contact with Bruce and Laura and they even came to see the house again after we moved in. We haven’t talked to them in years, but I am going to try and get ahold of them to share this post with them – and I’m sure that Bruce can correct me and fill in even more information about the history of the home and the Rosenberger family. There’s no doubt that in a couple of weeks as I’m helping to prepare Thanksgiving dinner in our kitchen, I’ll be thinking about how Elma Rosenberger was born over 100 years ago, right in the same spot where I’ll be standing.