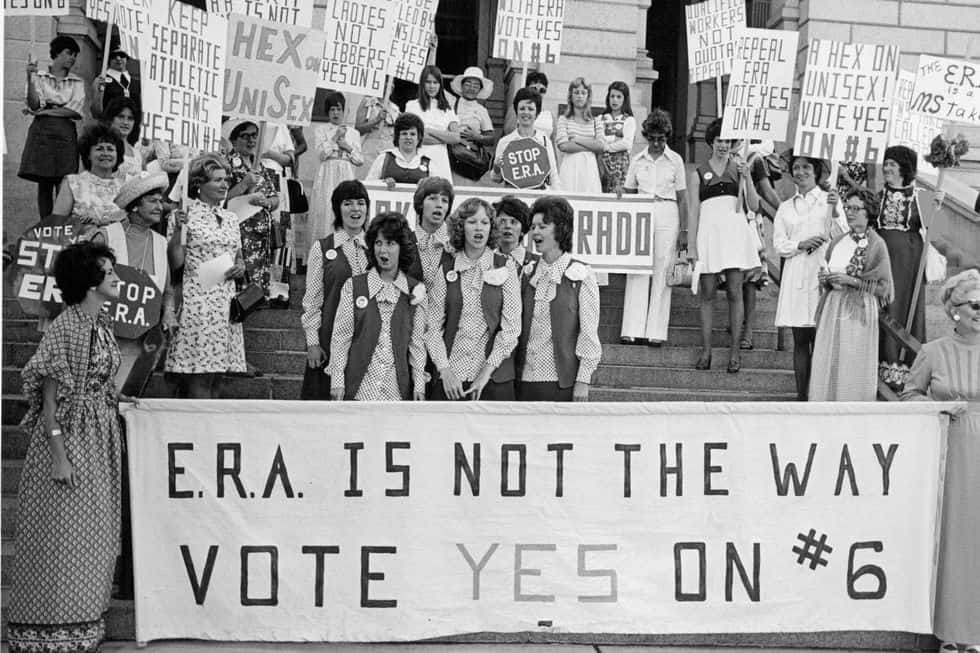 The first time I learned about the history of the Equal Rights Amendment, I could not believe that I had never heard about it before. At the beginning, it seemed as if the ERA was on a foolproof path to success. It was the early 1970s and following the Civil Rights Movement, adding an amendment that barred discrimination on the basis of sex seemed a natural step in the right direction. It was long overdue to be added, having first been proposed in 1923 by the National Women’s Party, and was gaining bipartisan support. 35 of 38 necessary states had ratified the amendment, and the strong momentum behind the ratification process made it seem like they would get three more in no time.

Then, Phyllis Schlafly entered the scene. A member of the National Federation of Republican Women and biological determinist, Schlafly was convinced that the ERA would destroy American family values, remove sexual assault protections, get rid of alimony, take away maternal custody preference following a divorce, and result in a downward slide towards same-sex marriage and free for all abortion. Even though none of Schlafly’s fears were actually backed up with evidence, she was able to organize a shockingly successful grassroots movement called “STOP ERA” (STOP = Stop Taking Our Privileges) that completely halted the momentum of the ERA within a year. She was an effective speaker and debater and knew exactly how to tap into the fears of conservative women. She targeted battleground states, organized huge rallies, and lobbied all the right state legislators. By 1973, the number of states that ratified the ERA stood still at 35, and remained just three states short until it’s expiration in 1982.

As much as I have a personal vendetta against Phyllis Schlafly, the fact that she rapidly organized such an incredibly successful grassroots movement that took down something as monumental as the ERA is rarely talked about in history classes, and I think it deserves a place.

If we had passed the ERA back in the early 1970s, that would have paved the way for all sorts of major sex-based issues such as Title IX, same-sex marriage, and transgender rights to come to the stage decades earlier than they actually did. It also would have acted as extremely strong constitutional evidence in all of these cases when they did come about. This year, Virginia became the 38th state to ratify the ERA (a few decades late) but nothing has happened yet because no one knows what it means to have an amendment be ratified so long after it’s technical “expiration” date. I guess we are still waiting to see if we will ever get an Equal Rights Amendment.