I did accomplish my goals in presenting the historical thinking skills Social Security lesson adopted from Historical Thinking Matters. We were able to explore two historical thinking skills: close reading and corroboration while exploring some of the history around the development and evolution of Social Security. Two positive outcomes were: (1) I was able to comfortably present the lesson in the allotted time, and (2) my peers were able to share with me, during closure, one or two things they learned from the lesson.

I received feedback that spending more time talking about the Social Security Board poster prior to asking students to sketch the poster would be helpful. In retrospect, I wish I had asked the students to come up to the front of the room to explore the poster as there was a lot of text that may not have been legible. I also received feedback regarding the flow and the variety of materials presented. I understood that the variety of materials (poster, video, congressional testimony excerpt) is appealing. I received a positive response regarding the flow of the lesson, as well.

I learned that there are a lot of very well-crafted materials available that can be adopted to one’s needs or to an allotted time frame and that it is okay to reshape materials in a way that works for you. I also learned that I was more capable than I thought in terms of presenting the lesson and that running ideas by peers is an excellent way to improve my future lessons. 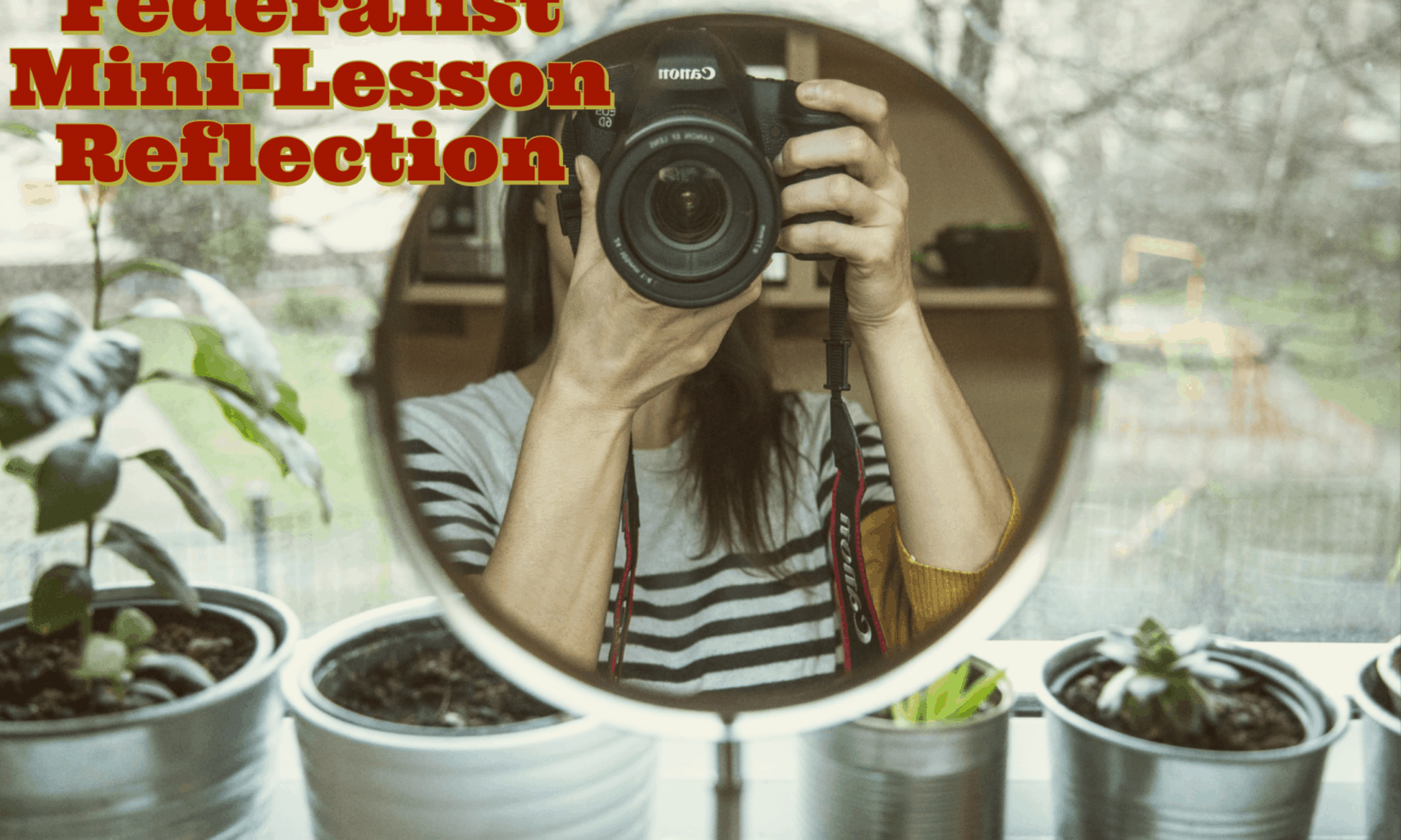 After completing my miniature lesson that was meant to introduce potential middle school students to the topics of federalism and anti-federalism, I have a better idea of things I can do to improve my overall lesson. The purpose of my mini-lesson was to get students more involved in this part of history through participating in a debate where students unknowingly were supporting the views of federalists and anti-federalists. At the end of the lesson, each “side” of the argument was revealed and students were able to see what side of history their political views placed them on. My intention for this mini-lesson was to have students engage with viewpoints that were shared by major historical figures to introduce them on an intended following lesson on federalism and anti-federalism. This activity was mainly student-led (since they developed arguments and debated with one another with little interference from the teacher), which I preferred for this lesson because I felt the students would find more meaning in the material since they were interacting with one another during the whole process.

Largely, I feel as though my lesson was successful in the small setup we had in the classroom. For example, I was lucky enough to have each of my debate teams be of equal size with the students choosing their own side to defend. This, however, is something that is unlikely to happen in a regular classroom setting. One suggestion that I found to be very valuable in improving my lesson would be to divide the class into smaller groups to make a debate more manageable. I feel as though this method of having 4-5 smaller groups developing their arguments then debating with one another has the potential to make my lesson successful in the general education classroom by minimizing the chaos that could potentially ensue with a group of 30+ children debating one another.

Another piece of feedback that I found to be especially valuable was my classmates’ suggestions to provide a printout that summarized the arguments of the federalists and anti-federalists so students would have a resource to refer back to when developing their arguments. This made me realize that it could be inconvenient on both myself and the class if I constantly had to go back and forth on the slideshow to display a specific piece of information. Therefore, I think a printout with bullet points of each side of the argument would make it easier for students to observe the information I give to them.

Finally, after completing my lesson I can also see where the debate itself in my lesson could have been improved by giving the students specific questions that they would be debating before they delivered opening statements. This would give my students the opportunity to develop their argument further based on the questions I gave them. Also, while it did work successfully in the mini-lesson, giving students specific questions may encourage my students to speak (since they will know exactly what is being asked of them) and participate in the debate. I know with my target audience of middle schoolers, getting them to participate can sometimes be a struggle. However, providing them with the “essential questions” for the debate and having them perfect their argument in small groups with peers has the potential to make students more confident in the arguments they produce and make them more likely to share their ideas.

After going through this mini-lesson in class, I feel as though I am clear on the ways it can be improved to the level that I think I would be incorporating a similar lesson with my students when they enter their unit on government. Some of these issues I hadn’t seen through my own development and test-run, so it was extremely useful to have a test run with my classmates and receive feedback on ways I can improve in my lesson moving forward. However, I was also able to see where my lesson was already strong as well, which gave me a little more comfort in my ability to create my own lessons (which will be extremely useful moving forward in my teaching career). 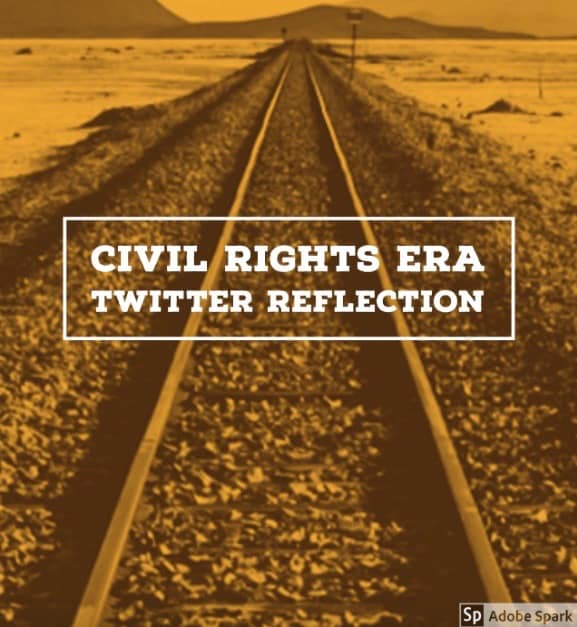 One of the objectives for this lesson is for students to be able to understand what their historical figure is known for and show that they knew that by making a fake social media for them. This gives students a chance to use something they’re familiar with, social media, interpret things they’ve learned.

I think with the time constraints and limitations, I was able to accomplish my goals during this lesson. I liked how I was able to incorportate technology and use the Padlet to act as a fake social media feed. I could have used a different template on Padlet and wish that I had so that students would have been able to comment on other students posts. But I also liked the template I used because it gave more of a Twitter feed feel that the other templates did. It all depends on what you’re looking for. I think also requiring that one of the tweets incorporate a photo, or a quote from their historical figure or a major accomplishment from their figure as well, would help structure the directions a bit more as well. I also would have liked to give an example of what I was talking about because I didn’t realize a couple students were a little unsure after I gave directions. I liked how I was walking around the room to make sure that students were on task and that I was available if students had questions as well.

This lesson was based in independent work and students were able to complete the necessary work on time. Students were quiet and focused while working. This provided our classroom with a quiet work environment so that students could finish the task at hand. After students finished their 5 tweets, I brought the class back together and each person was able to share a tweet they thought was significant and why they chose to post it. I think my timing was good and I divided things up well so that students had time to listen to directions, work independently, and then explain why they wrote what they did.

After giving this lesson once, I learned how I can tweak things to make sure I’m clear in my expectations and directions as well as giving students enough structure and time to complete the activity. I think this is a good activity to wrap a unit and gives students the ability to show what they know instead of just taking a test.