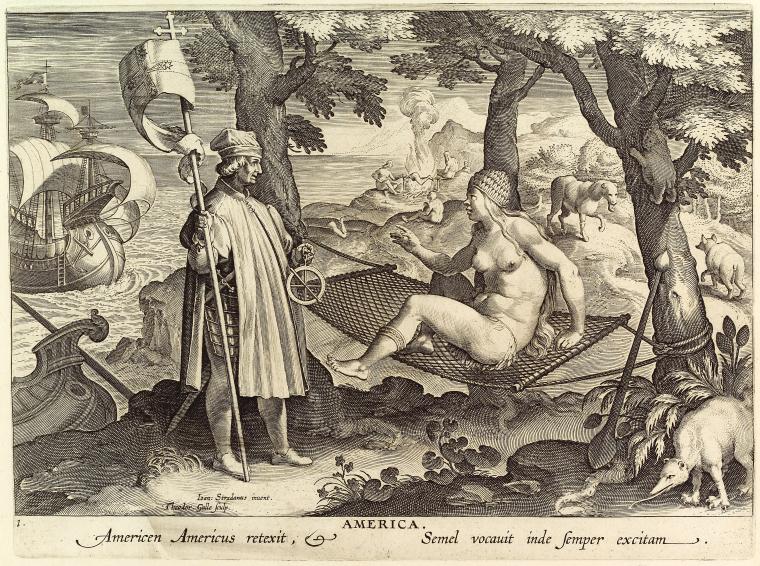 Central Historical Question: What were the European perceptions of the natives in the New World?

Topic: Colonization of the New World

Question A: Explain why a historian might or might not believe that the excerpts from Columbus’ diary provide enough evidence to understand European perceptions of Native Americans.

Here follow the precise words of the Admiral: “As I saw that they were very friendly to us, and perceived that they could be much more easily converted to our holy faith by gentle means than by force, I presented them with some red caps, and strings of beads to wear upon the neck, and many other trifles of small value, wherewith they were much delighted, and became wonderfully attached to us. Afterwards they came swimming to the boats, bringing parrots, balls of cotton thread, javelins, and many other things which they exchanged for articles we gave them, such as glass beads, and hawk’s bells; which trade was carried on with the utmost good will. But they seemed on the whole to me, to be a very poor people. They all go completely naked, even the women, though I saw but one girl. All whom I saw were young, not above thirty years of age, well made, with fine shapes and faces; their hair short, and coarse like that of a horse’s tail, combed toward the forehead, except a small portion which they suffer to hang down behind, and never cut. Some paint themselves with black, which makes them appear like those of the Canaries, neither black nor white; others with white, others with red, and others with such colors as they can find. Some paint the face, and some the whole body; others only the eyes, and others the nose. Weapons they have none, nor are acquainted with them, for I showed them swords which they grasped by the blades, and cut themselves through ignorance. They have no iron, their javelins being without it, and nothing more than sticks, though some have fish-bones or other things at the ends. They are all of a good size and stature, and handsomely formed. I saw some with scars of wounds upon their bodies, and demanded by signs the of them; they answered me in the same way, that there came people from the other islands in the neighborhood who endeavored to make prisoners of them, and they defended themselves. I thought then, and still believe, that these were from the continent. It appears to me, that the people are ingenious, and would be good servants and I am of opinion that they would very readily become Christians, as they appear to have no religion. They very quickly learn such words as are spoken to them. If it please our Lord, I intend at my return to carry home six of them to your Highnesses, that they may learn our language. I saw no beasts in the island, nor any sort of animals except parrots.” These are the words of the Admiral.

This is a large and level island, with trees extremely flourishing, and streams of water; there is a large lake in the middle of the island, but no mountains: the whole is completely covered with verdure and delightful to behold. The natives are an inoffensive people, and so desirous to possess any thing they saw with us, that they kept swimming off to the ships with whatever they could find, and readily bartered for any article we saw fit to give them in return, even such as broken platters and fragments of glass.

Question B: Read the additional documents from Amerigo Vespucci and Virginia Company. Does each document support the diary excerpts from Columbus? If they cannot be used to support Columbus’ claims, explain why not.

We found a lot of naked people. they have no laws, and no religion. They just live by nature. They own nothing, and share every thing. They have no country, borders or king. It seems that everyone is his own master.

They live together in huts, built without any metal. What a surprise, I have seen houses 220 feet long, and 30 feet wide that can hold 500 people. They sleep in hammocks of cotton; they sit on the ground and eat the roots of herbs, or fruits and fish.

They are cruel people, but I don’t understand why they go to war. They don’t fight for power or to take things from their enemies. When we asked them about this, they said they fought as payback for the murder of their families.

It will be easier to conquer them, than civilize them. They are a rude, barbarous, naked people, scattered in small villages. This would help us to defeat them. It would also make it tough to civilize them. We can conquer them all at once. Civilizing them is slow and will take much more effort.

We can have victory over them many ways– by force, surprise, and famine.We can burn their corn, boats, canoes, houses and fishing equipment. We can disrupt their hunting. That’s how they get most of their winter food. We can chase them with our horses and bloodhounds, and our big mastiff dogs will tear them apart.

Students should note that while the source is very detailed, it is the account of only one man who was also known for bending the truth to achieve his aims. The account is, on the other hand, reliable in that it is written in the time period it describes by someone who experienced it first hand before anyone else, so his response is not marred by the bias of others before him. Regardless, what Columbus say may not be representative of all Europeans.

Student should see that the two additional accounts support European perceptions of natives as backward and savage peoples though they are written years apart. They should also be able to cite specific similarities in the accounts, such as seemingly simple lifestyles and modest housing.

What I really enjoyed about creating this lesson using the SHEG model was how it genuinely encouraged students to think like historians through emphasis on sourcing, contextualizing, and corroborating. Students are given concrete ways to look at the sources and practice these skills in a way that is not intimidating, but that still allows them to use primary sources. It’s fantastic to see so many lessons that get students to engage with the material directly and make their own arguments instead of being told what to think from a textbook. I look forward to implementing some of these lesson plans and seeing how students feel about them as well.

How did cultural exchange occur between Native American residents and European conquerors upon first contact?

This is the question I want my students to tackle. By utilizing documents and artifacts from both sides of the cultural exchange, students will be able to develop a multi-perspective viewpoint on European/Native American contact as opposed to the Eurocentric viewpoint that most students in the U.S. experience.

The exercise will allow students to develop a more complete view of this segment of history by developing perspectives from various lenses. Students can explore narratives from both sides, find textual and visual evidence to show these statements, and interpret these observations in order to develop their worldview more completely.

Through group discussions and written analysis, students will be able to share their experiences with these documents and artifacts.