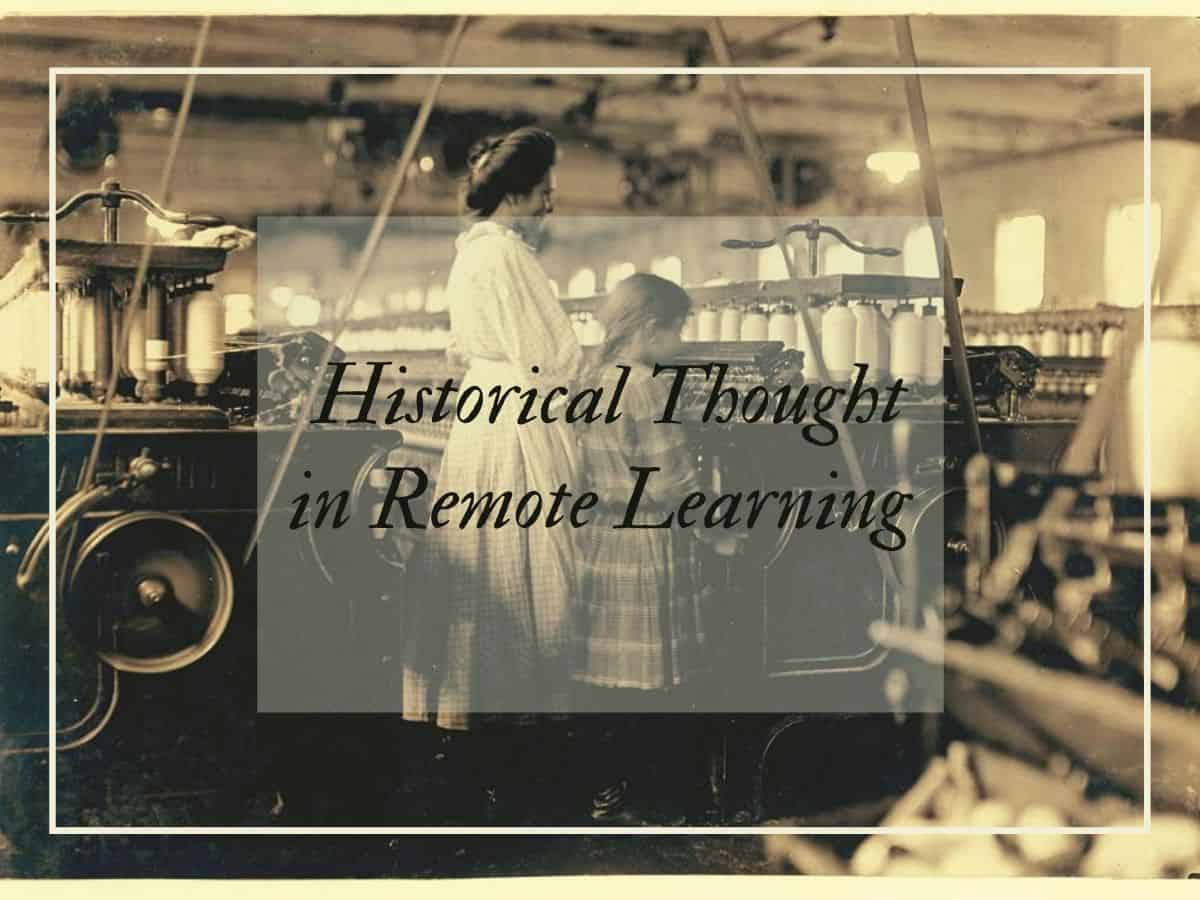 One of my favorite things about studying history is learning how to dissect a source and understand what voices of the past have to tell us today. Approaching the start of my student teaching placement, I was concerned about I would have success engaging with students in an online format. I was unsure if my love of the subject would carry through and if students would be able to grasp the lessons, I hoped they would. While remote learning has certainly come with its own struggles, I am pleased with the progress I have made encouraging students to engage with primary source information and come to their own complex conclusions.

Over the summer of my MAT program, one of my instructors, Tom McKenna, showed us a lesson he had created for his students in 1983. As a teacher, Mr. McKenna sought to teach students at Grant High School about redlining and the racial history of Portland by asking his students to create a short film about South Portland. The film included photos, map, and interviews with residents of the now demolished South Portland neighborhood. Once home to Portland’s immigrant community, the film showed how urban renewal projects labeled parts of South Portland as ‘blighted neighborhoods,’ making way to the condos, Keller Auditorium, and other features the city hoped to construct in South Portland in the 1950s. In other terms, Mr. McKenna’s class did the work of real historians – discovering the past by tracking down primary and secondary source information and creating something new to contribute to the conversation around the history of urban renewal in Portland. As a history teacher, I seek to create lessons that can similarly extend beyond simply memorizing dates, names and facts. I want students to grapple with the tangible questions of history by creating and discovering the past in a way that transcends textbooks to build critical and historical thinking skills, persuasive speaking and writing, creativity, and a desire to learn.

This class gave me the flexibility to explore document-based lessons in a variety of approaches and technological considerations. Below, I’ve highlighted several lessons I created with the intention of building these skills.

In this lesson, students will analyze a series of images related to the theme of organized labor struggles to build historical thinking by asking key questions about each document that are designed to scaffold students to increasingly complex levels of historical thought. By asking and responding to these questions, students will gain a greater understanding of labor rights struggles and an appreciation for multiple points of view on related issues such as racism in the workplace, and source bias.

This lesson could serve as an introduction to labor rights struggles that accompanied the Gilded Age. Students would use critical thinking to analyze image primary sources as a way to prepare for analyzing the era in greater detail.

This lesson is the basis of the first lesson that I taught in my student teaching placement. Renaissance Italy was one of my primary focus areas as an undergraduate, and as soon as I discovered that my CT was preparing material to teach about the Black Plague, I was immediately excited to jump right in. Along with my PLC’s co-student teacher, Maggie, I created two lessons that asked students to explore primary sources from the era of the Black Plague to understand this time period and draw parallels to the COVID-19 pandemic.

The first lesson included several written and image primary source documents along with sourcing questions that were selected to encourage students to consider the meaning of the source and their authors potential biases and points of view.

The second lesson asked students to draw parallels to the modern-day, including by comparing the uniform of plague doctors to that of a doctor treating COVID-19 patients and analyzing medieval thought to how diseases spread through artwork with modern government infographics. Lastly, this lesson included an opportunity for self-reflection by allowing students to describe ways that COVID-19 had affected them personally.

This mini lesson was designed as a potential companion to a social studies class conversation about the history of freedom of speech by introducing students to a time in which free speech was restricted during WWI. This lesson could be either a part of a government class, or a U.S. history class in a larger unit on WWI. Engaging in this lesson as a larger part of WWI also has the potential to allow students to see beyond the combat of the war itself to understand the consequences that the reality of the war had in the U.S.

This lesson includes a Google Form with an embedded version of former presidential candidate and labor rights activist, Eugene Debs, famous ‘Canton Speech,’ in which he decried the U.S. government’s involvement in WWI. After listening to the speech, students in this lesson will read an excerpt from a newspaper article describing how Debs was arrested for ‘disloyalty’ for giving this speech and asked to respond to questions that gauge students factual understanding of the speech and newspaper article and asks for them to provide their opinion on the legal and ethical question of if Debs’ arrest was justifiable and if freedom of speech should ever be restricted.

This lesson encourages students to understand the contest of the era and leads into a larger political debate that is applicable both to our past and the present. One way to expand on this mini-lesson could be by breaking students into two groups to debate Debs case, and whether the U.S. government was justified in arresting political dissidents for speaking out against the war.

My final project for this class, and one of the lessons I am most proud of, this lesson guides students through an exercise in indigenous land recognition. Land recognition is a concept which I only became familiar with in the last few years, however, I believe this simple act of recognizing the indigenous groups that still struggle with the effects of settler-colonialism is highly important. I believe this lesson could work as part of a unit on the concept of westward expansion to recognize the indigenous groups, whose struggles are often left out of the school textbooks and School House Rock videos on this topic. Additionally, this lesson could fit in with a unit on indigenous history for students to learn about the original people who inhabited the Pacific Northwest and build students empathy towards their historical marginalization.

In this lesson, students will be introduced to the concept of land recognition and its importance by viewing two videos about the importance of honoring native land. The intention of these videos is to start a class conversation which would gauge student’s thoughts on why it is important to acknowledge the original people of the land and what we can do to examine the impact of our presence on native lands.

Further, students will analyze two maps that show U.S. settler expansion and which lands are technically ‘unceded.’ This map also allows students to learn about the names and dates of different treaties involved in the U.S. government taking indigenous lands. The lesson includes sourcing questions for students to read and analyze the Treaty with Kalapuya, which ceded lands of much of present-day Oregon to the United States.

Lastly, students will use a second map to identify and learn about the original people of the Pacific Northwest, including where they lived and the languages, they spoke to create their own land acknowledgements.

I believe this lesson could be expanded on to encourage the school to create its own land acknowledgment or engage students in meaningful indigenous activism, such as a clothing, supply, or PPE drive for indigenous communities fighting COVID-19.

The final post I wish to highlight in this portfolio takes a more personal approach than the others highlighted above, however, I believe it could be adapted into a meaningful lesson on immigration, redlining, and personal history. We examined HOLC redlining maps and census data to analyze housing practices and learn about life in the 1940s. I chose to use this as an opportunity to explore my personal family history by finding my family in the census and writing about the historic Greek Neighborhood that existed in San Francisco in the early 1900s. This was an excellent project for me to learn about the importance of ‘place’ as a historic and geographic concept.

I believe students would benefit from an adapted version of this project, which either encourages them to explore their own family history or the history of where they live. I believe an adaptation of this project could benefit students by connecting historic concepts they’ve learned about with themselves, and see how history affects them and their families more personally. This lesson could also serve as an introduction to housing segregation practices, and the concept of redlining, Portland’s Vanport and Albina neighborhoods, and urban renewal, more broadly.