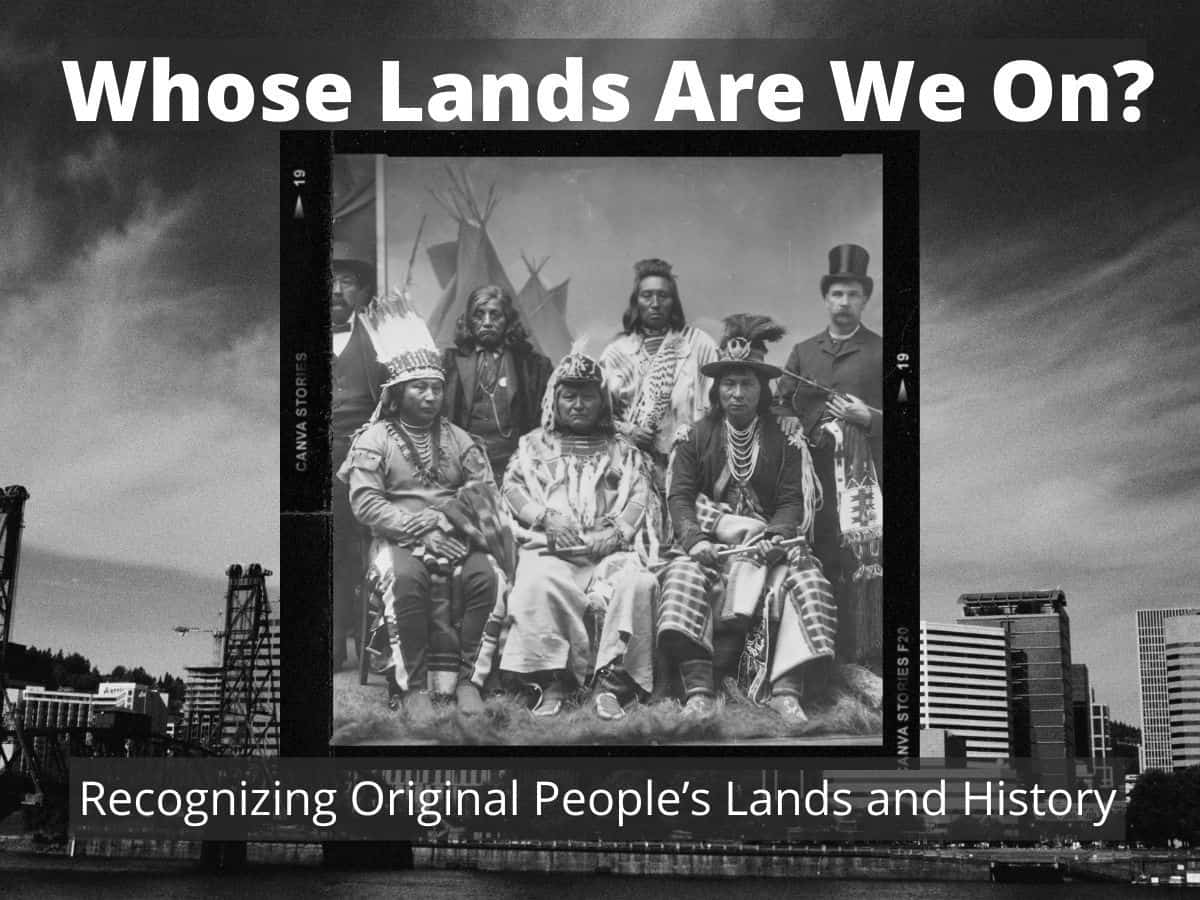 Instructional Goals:
The purpose of this lesson is for students to identify local indigenous tribes and evaluate how those groups were impacted by U.S. westward expansion. Students will be able to use the Native Land map to identify indigenous groups in different regions of the Pacific Northwest and create a land recognition book using Book Creator that recognizes indigenous territories, languages, treaties, and the impact of those treaties today.

Intended Grade and Background:
When I started studying history at the college level, one of my biggest realizations was just how much of the history I had learned in K-12 had been thoroughly white-washed. Despite the fact that I grew up among the towering redwoods that the Awaswas Ohlone people historically called home, this chapter of history was largely omitted from my education. Instead, my most significant memory of learning local indigenous history was in the form of building ‘Mission Projects,’ models of the Spanish missions that lined California, without much attention given to the sinister purpose these missions served. Today, I know that the primary goal of the scenic missions in California was the hegemonic destruction of indigenous culture and enslavement of local indigenous peoples. Much like the example of the mission projects, indigenous history is not given nearly enough emphasis in U.S. history classes. As we learn about concepts like ‘manifest destiny’ and ‘westward expansion,’ we should give consideration to the real-world consequences these concepts had on the diverse indigenous groups who already lived in these regions.

In theory, this lesson would be part of a broader unit on North American indigenous tribes and groups, and would likely come near the end of the unit as an end-of-unit project. This unit would likely take place as a fulfillment of Oregon Senate Bill 13 to introduce individual place-based curriculum in K-12 public school curriculum. This unit could take place as part of a U.S. history class in early high school. Alternatively this lesson and unit could take place as part of a unit on indigenous government and Native American law in a government class. The Oregon Department of Education website contains a variety of lesson plans that fit into this context that are available to teachers to pull from. I could also see this as a useful geography lesson, especially by teaching students the names of geographic locations in the context of different indigenous languages. This lesson would likely occur over 2-3 days.

Essential Questions:
1. Why is it important to recognize indigenous lands?
2. What defines ‘place’ and who gets to decide what places are called on a map?
3. How does looking at indigenous maps make us rethink U.S. expansion and colonization?
4. What does it mean to say we are “on native land?”
5. How else can we validate indigenous people and lands?

SWBAT: During this lesson, students will create a land recognition book by looking at the Native Land map and treaty primary source documents. Students will identify the tribes that historically lived in locations in the Pacific Northwest and recognize those tribes’ lands, language and the impact treaties had on them. Students will be able to locate and display local indigenous geography.

The historical thinking skills that students will be working on include contextualization of primary source documents, recognizing how past events effect today, recognizing that documents are products of particular points in time, and establishing probable relationships by comparing different documents. The social-emotional skills that students will work on include empathy, awareness and understanding towards historically marginalized populations.

What is a land acknowledgement?

Scaffolding questions: (1) Why does the video claim it is important to acknowledge the original people of the land? (2) What tribes does the video state originally lived in the area that is now Portland? (3) How does this document agree with the previous video? (4) Beyond acknowledging the land itself, what other ways does the video suggest we should examine ourselves and our presence on native lands?

“Portland State University is located in the heart of downtown Portland, Oregon in Multnomah County. We honor the Indigenous people whose traditional and ancestral homelands we stand on, the Multnomah, Kathlamet, Clackamas, Tumwater, Watlala bands of the Chinook, the Tualatin Kalapuya and many other indigenous nations of the Columbia River. It is important to acknowledge the ancestors of this place and to recognize that we are here because of the sacrifices forced upon them. In remembering these communities, we honor their legacy, their lives, and their descendants.”

To understand how the U.S. committed genocide and stole indigenous lands, students will view the Invasion of America map, which shows a time-lapse of lands that were taken from indigenous people and incorporated into the United States between 1776 and 1887. The map includes several useful resources, including a legend, which importantly states which lands are current reservations, which lands were indigenous lands, and which territories are technically ‘unceded.’ Additionally, this map allows students to click on different regions to see the dates and treaties related to these lands.

Scaffolding questions: (1) What do you notice about map time-lapse? (2) What are the grey areas on the map? *hint, click the legend button to the left of the icon with the 4 squares (3) What does ‘unceded’ mean? (4) Review how we discuss the legacy of westward expansion and manifest destiny. How did these concepts affect indigenous peoples?

Having viewed the Invasion of America map, students will identify the Portland region on the map and click on it to learn more about Cession 352: the Treaty with the Kalapuya and confederated bands of the Willamette Valley. Students will take the treaty home to read about its terms before answering the sourcing questions below in the next class.

Sourcing questions: (1) Who wrote this document, why was this document written? (2) What regions does this treaty claim belong to the United States (hint – see Article 1) (3) How much did the United States pay these tribes for the land taken in this treaty? (hint – see Article 2) (4) What is the purpose of Article 8? (5) What does this treaty say about the level of agency the tribe has over its own lands? (6) Which of the articles do you believe is most important/consequential?

The next portion of this activity will allow us to learn more about the individual tribes that lived in what is now the Portland area. For this activity, students will be broken into breakout groups, and asked to use the maps to identify the tribes, languages and treaties of the following regions of the Pacific Northwest: Portland, Oregon, Vancouver, Washington, Seattle, Washington, and Bend, Oregon. Students will use the Native Lands map tools to navigate between each of these questions and find information for at least three of the tribal groups local to that area.

Scaffolding questions: (1) What tribes and languages are originally from the region you were assigned. (2) What treaties are associated with these lands? (3) What does it mean to say someone is native to this land? (4) Who gets to name these lands? Can you find any indigenous names of locations using the map?

Having now researched land acknowledgments and indigenous groups originating from different regions of the Pacific Northwest, students will now create their own land acknowledgment using Book Creator or Google Slides. As a class, each group will collaborate to create a land acknowledgment page for each region. The land acknowledgment will include each of the following aspects: the names of at least three groups that lived in this area, the language they spoke, and recognition of why it is important to acknowledge this. An example of what one of the pages would look like can be found below.

Scaffolding questions: (1) Are there any names of places near the cities you wrote land-acknowledgements for that use indigenous names? (2) What defines a place (history, people who live there, geography), (3) Who gets to decide what places are called on a map? (4) Assess how completing this activity either has or has not changed how you think about topics like westward expansion and U.S. colonization. (5) Having completed this project, what does it mean to say we live on native land? (6) Beyond acknowledging lands, how else can we validate and uplift indigenous people and their lands?

As stated above, I think this lesson or series of lessons would work as part of a unit on indigenous history, or as part of a unit on geography or government. Activities described above may have to be scaffolded up or down depending on the age group engaging in the lesson. If possible, I believe it could be valuable to incorporate this lesson into larger action outside of school. This could include petitioning the school to practice a formal land acknowledgment before events, fundraising for indigenous organizations and causes (such as a warm clothing or supply drive for water protectors, or a PPE drive for indigenous communities fighting COVID-19), or conducting further in-depth research of local indigenous communities and their languages.

Some potential scaffolds and curriculum suggestions include:

Outside of recognizing the original people of the land, I would close this lesson by asking students to research additional resources to continue learning about, recognize, and validate indigenous people and land, including supporting indigenous organizations, joining protests, or other forms of advocacy.

* Photo of the members of the Umatilla Tribe. The Cowlitz tribe would have been the tribe that lived in the Portland area, however, I did not find photos of this group in the public domain

One Reply to “Whose lands are we on? Recognizing Original People’s lands and history”