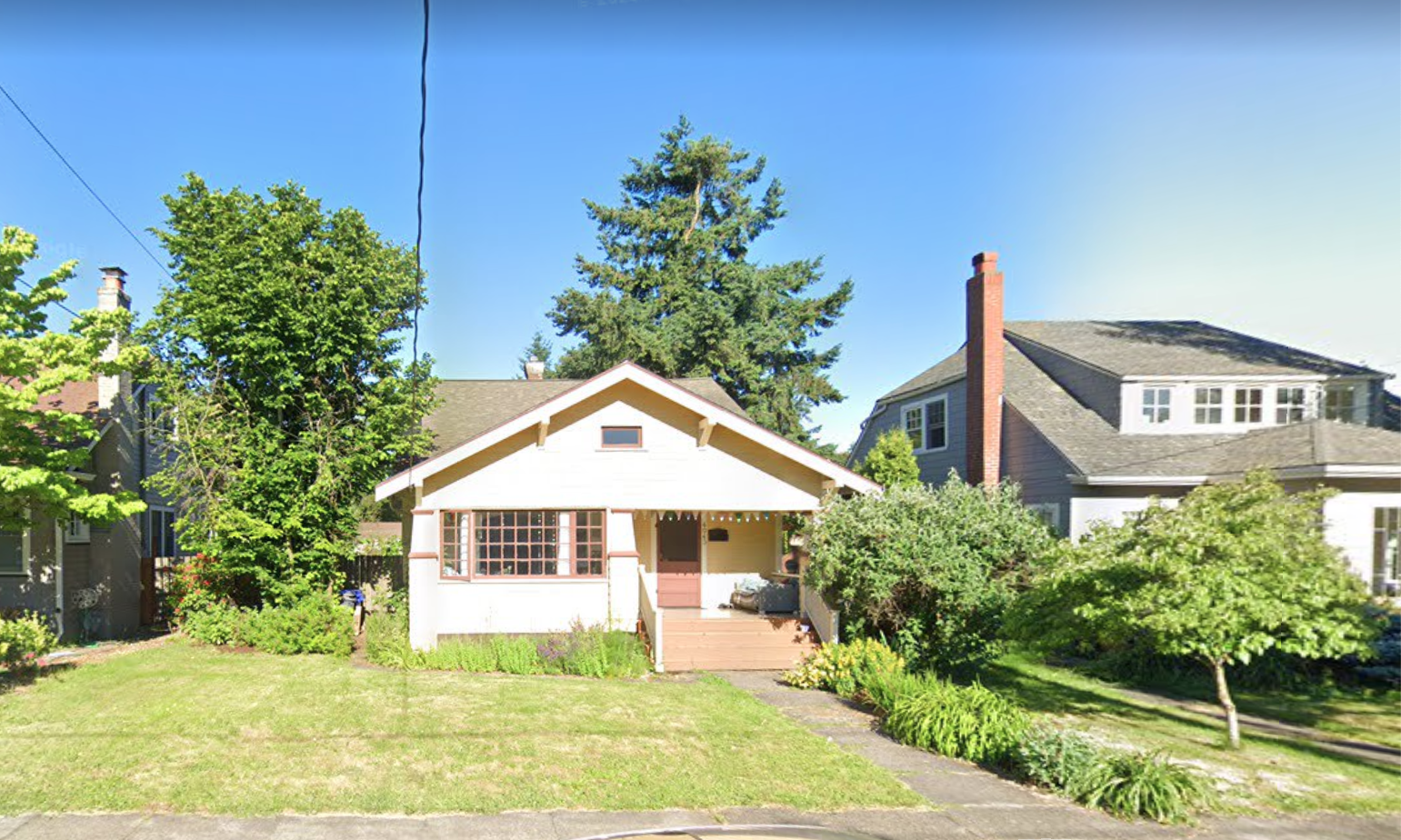 For the 11 years that I have lived in Portland, 6 of them have been in the same home at 4043 NE 23rd Avenue in the Sabin neighborhood. I shared this home with a group of folks that I consider to be found family. As a queer man I recognize that family is not only those that share your blood, but includes those who share experience and deep understanding of each other. In this home we saw so many important moments: couples marry and separate, two children be born and have their first milestones of life, holidays and parties, fights and reconciliations, meals and music. It was a good and happy home.

We were the odd house on the block; in a sea of single-family homes, we were one of the few rental units on the block. Our neighbors were curious at best of the place that had 6 adults sharing one roof and at times were opening scornful and cold. We frequently had neighbors ask about how many cars would be out front, who would be maintaining the yard, and in one memorable moment, ask us to not be seen outside while an open house was going on next door. It was often clear that our neighbors worried about what our presence would do to the perceived property values of their own homes.

Our block of 23rd Avenue between Alameda and Mason streets is a transition zone between the ultra-wealthy and expansive homes along Alameda Ridge to the more middle-class neighborhoods surrounding the Alberta Arts District. We didn’t know much about the history of the home; but when we moved in we used Portlandmaps.com to learn that it had been built in 1920 and that our landlords had purchased it in 1990 for $55,000; by 2020 the market value of our home had risen to $510,000. This is part of a wider trend of home value increases and gentrification not only for the Sabin neighborhood and NorthEast, but for the whole city of Portland, as well.

Using the Mapping Inequality website, in 1940 my home was considered at the edge of a residential area graded as green or “Best”. There were no subversive groups present, no African-Americans, labeled as “negros” in the material, no relief families, and little chance of infiltration. The majority of homeowners had occupations that fell into the category of “Business & professional men- executives, etc.” Yet despite this designation, at the north end of the block, the designation begins to change rapidly. NE 23rd Ave, from NE Mason to NE Skidmore (a distance of one block), is downgraded to Blue or “Still Desirable” due to the “Proximity to subversive racial elements”. From NE Skidmore to NE Prescott, NE 23rd Ave is downgraded again to Yellow or “Definitely Declining” due again to the “Proximity to subversive racial elements” and “Some streets unimproved”. And finally with the start of the next block, NE Prescott, and stretching north for 6 blocks up to NE Killingsworth, NE 23rd is downgraded to Red or “Hazardous”. This area contains subversive groups, is 35% Russian, has 21 African-American families, and “many” Relief Families.

In 1940 this Hazardous neighborhood was perceived as an almost socio-economic Black Hole, its gravity pulling the surrounding areas down with it. It’s Trend of desirability for the next 10-15 years is rated as Static or Declining. It seems obvious today that designating an area as “Hazardous”, “in decline”, and as a threat to surrounding neighborhoods does nothing to alleviate to any issues that may exist within the area. It does nothing but help perpetuate the cycle of poverty by discouraging investment and development. Also, if the designations of Hazardous are based purely on the racial and/or ethnic background of the place, it is an impossible (and bigoted) metric to judge by. People will stay Russian or African-American, that cannot change. People who are Russian or African-American will always need a place to live, work, and raise families; their existence cannot be considered Hazardous.

I can’t help thinking about what my own household would have been like in the 1940s based on the criteria listed. In my time at 4043 NE 23rd my household included a Russian-American Jew, a Korean immigrant, a Mexican-American ex-convict, two gay men, a transsexual man, a mix-raced child, and a child born out of wedlock. We often joked amongst ourselves that we were a Conservative’s worst nightmare. In 1940 however I can’t help but think we were the poster child for a Hazardous home. I doubt that if our home had been a rental unit in 1940 we would have been allowed to rent it, or inside of it for that matter.

In the years following 1940 this area of Portland became increasing Black. Alberta became the heart of a vibrant neighborhood with African-American owned businesses and cultural centers. However, the legacy of Redlining, the systematic denial of services, especially financial services to groups of people based on race or ethnicity, caused Portland’s African-American population to be concentrated, and often, excluded from the opportunity of home-ownership. By the early 1990’s when The Oregonian broke the story on Redlining through its series Blueprint for a Slum some homes in the area were only selling for $3,500; ironically, the same price as my home was worth in 1940. The lack of traditional lenders for African-Americans led desperate would be home owners to turn to risky financing; in this case loans offered by Dominion Capital Inc. Buyers would purchase loans unaware that Dominion had loaned more than what the properties were wort. This predatory behavior was ignored by the Attorney General until the story broke.

Since the early 2000s the neighborhoods around Alberta have quickly gentrified, especially after the area rebranded itself as the Alberta Arts District. Where once this area brought the surrounding neighborhoods property values down due to its racial makeup and the presence of other so-called undesirables it is now raising property values and seeing a rash of development. Cruelly and ironically this reversal of fortune has spelt disaster for the African-American community surrounding Alberta. As property values rise and new condos, apartments, galleries, and hip businesses move African-Americans have been pushed out of the area, once again being denied the access of social mobility and the building of wealth.

Using the US Census for this project I found that in 1940 this home belonged to the Lansworth family, headed by Ruth, a 41 year old widow, originally from Illinois. Ruth worked in the garment industry, mending hosiery and was raising her 3 daughters: Mary-Norma age 22, Elizabeth age 15, and Grace age 14. I feel a certain joy in knowing that Ruth worked in textiles as my own housemate, Megan, started her own clothing and mending business, Golden Dinosaur, in the front room of our home. It was a connection to the past that stretched some 74 years. I wonder what Ruth would make of her home and her neighborhood all these years later.

My chosen family and I shared this home until 2020. The COVID-19 pandemic upended our plans for living together. Several of us, including myself, lost our jobs due to the lock-down. Our landlords were patient, but ultimately we knew the rent was too high for us to pay with only unemployment and eventually we certain that we would be evicted. We went our separate ways, but we stayed in contact and relatively near each other.

3 Replies to “The Changing Face of NE Portland”