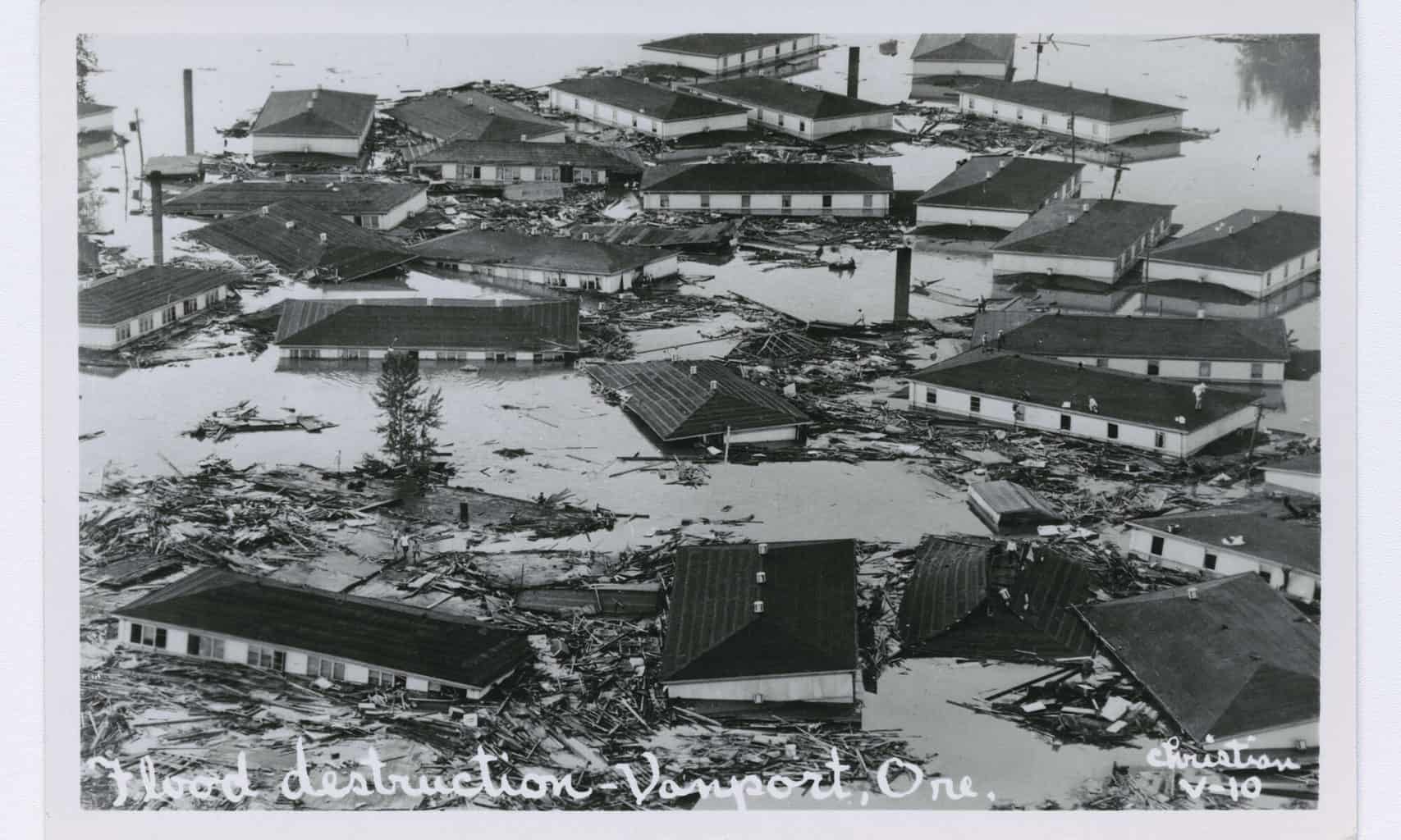 Essential Question: How is the legacy of Vanport still felt in the city of Portland today?

Assignment: Read the following history of Vanport, Oregon. Once done reading watch the short film by the Oregonian and examine the photos and guiding questions. You will be investigating the events of Vanport and answering our essential question by writing 2-3 sentences in your notebooks.

Vanport was the largest Federal Housing Development at the time of its construction in 1942. The city was founded on a tract of unincorporated swampland in Multnomah County, Oregon along the banks of the Columbia River. Its name was a portmanteau of its municipal neighbors: Portland, Oregon and Vancouver Washington . The city was constructed during WWII as a public housing estate for the workers and their families employed at the Kaiser Shipyards.

By the mid-1940s Vanport became Oregon’s second largest city with some 40,000 residents, of which, 40% were African-Americans. Despite the fact that Vanport was built with federal funds and constructed after Executive Order 8802 – which banned discriminatory employment practices by Federal agencies and all unions, local officials still enforced de facto segregation. In Vanport, only three sections, a total of 50 buildings were allotted to black residents. Moreover Vanport was one of only two housing projects in the Portland area that accepted any blacks. Despite this low number of residential housing dedicated to African-Americans white residents in neighboring Portland called the area “the Negro Project”.

Portland had long had a reputation of prejudice and racial discrimination; a city where the African American population had been kept intentionally small and economically and culturally marginalized. Because of this legacy only 2,000 African Americans lived in the city prior to WWII. Oregon, outside of Portland, had an even smaller black population due to its legacy as a “sun down” state. The state constitution had prohibited blacks from residing in the state. The state also was also a stronghold of the Ku Klux Klan; by the end of the 1920s there were 35,000 Oregonians who were members of the hate group.

By the end of the war in 1945, Vanport’s population shrank to roughly 19,000 of which approximately 4,000 were African Americans who continued to live in Vanport while another 5,000 were crowded into the nearby Albina neighborhood in Northeast Portland. Many African Americans in the city continue to believe that local government officials kept Vanport open, despite its slowly degrading infrastructure, because they did not want more blacks to move into Portland city limits.

In 1947 the Oregon Journal conducted a series of articles investigating Vanport and how it had become an “eyesore” in the eyes of surrounding communities: “To many Oregonians, Vanport has been undesirable because it is supposed to have a large colored population,” The articles continued,”Of the some 23,000 inhabitants, only slightly over 4,000 are colored residents. True, this is a high percentage per capita compared to other Northwestern cities. But, as one resident put it, the colored people have to live somewhere, and whether the Northwesterners like it or not, they are here to stay.”

An unusually wet winter and two rainstorms combined to a create a perfect storm on Memorial Day May 30, 1948. A hole developed in the railroad dike blocking the Columbia River, and it erupted into massive flooding. City officials didn’t warn residents of the dangerously high water levels and choose to not issue an evacuation. Due to the holiday few residents were at home at the time of the flood, contributing to low loss of life. Despite this 15 people lost their lives as a 10-foot wall of water swept through the city. Many residents became trapped in their vehicles as the only exit out of the city became choked. The city was declared a total loss by day’s end.

The scale of the tragedy temporarily overcame the legacy of racial discrimination in Portland. White families opened their homes to displaced African American families. This act of mercy was short lived as racial lines that existed before the flood arose again as black families sought new homes. African American residents displaced by the flood equaled the entire population of Albina. It became virtually impossible for these residents to crowd into the only areas they were allowed to buy homes and cause neighboring independent towns and neighborhoods, like Kenton, to absorb the dispalced.

Despite its short life span, Vanport helped create several “firsts” for Oregon and the Portland area.  The first black teachers and policemen in the state were hired in Vanport during the war years.  The Vanport Interracial Council worked to establish a Portland office of the Urban League.  Vanport College was the precursor to Portland State University where many veterans used the GI Bill to get a new start on life.  In the end, Vanport became part of the story of civil rights and African Americans in the West.

Does this flood event and how it impacted people of color remind you of other events in recent American History?

Based the map above, is there anything about the design of the city that may have contributed to its destruction or the loss of life?

The three photos above show Vanport during its heyday. What aspects of this community made it an attractive destination for migrant workers and their families? Why would so many African Americans be drawn to this area – was there something occurring in other parts of the United States that would have led them to migrate?

The above photo is of Vanport City Vacation School in August 1943. What do you think of the racial makeup of this class? How do you think residents in Portland would have reacted to this class?

The above photos show the Memorial Day flood and fleeing residents. The city of Vanport was completely destroyed by the flood and residents had little time to escape. What does this mean for the residents in terms of their livelihoods and possessions?

2 Replies to “The Vanport Floods:”