Christina Steiner and I have been working on this project for several weeks. We started out with the idea that propaganda is meant to stir feelings in a certain direction, bad or good. Then we decided that we wanted students to recognize the use of propaganda throughout history. Our general question was “What do we want students to learn from the DBQ overall?” The generative question that we formed out of this starting idea was: “How does a nation develop such an intense fear of an enemy, creating mass hysteria?”

Christina and I chose documents that would help answer the generative question. We found A LOT of interesting documents and images, but we tried to stick to those that would answer that generative question. This kept us focused on the task at hand. We also ended each document or image with follow-up questions, to scaffold student understanding of propaganda. We wanted each document or image to provide a great deal of information that could lead to greater student discovery and interaction with each piece.

The final project can be found here on Learnist and will soon be part of a larger iBook. Through this project, students will come to see and learn how America held such great fear of communism though images, books, comics, films, and posters. We looked specifically at media, examining the creation of enemies based on common perceptions rather than true events or facts.

A few weeks ago Kristi Convissor and I started creating a DBQ project. We first started with a general outline the DBQ would take. We asked ourselves “What do we want students to learn from the DBQ overall?” To answer that we came up with a generative question to help guide our designing processing and to help the students when they are using the DBQ. The generative question was: “How does a nation develop such an intense fear and enemy, creating mass hysteria?”

From there we narrowed it down to look specifically at the Red Scare in 1950s America. We wanted students to learn about Americans fear of communism during the time. We wanted students to not only be aware of the hysteria but to understand where that fear developed from. One of the goals of the DBQ was to get students to think about what kind of words, actions, depictions lead to fear and what kind of outlets are needed to create mass hysteria. If students understand that then they can see how the Red Scare came to encapsulate so much of the 1950s.The design of DBQs lends well to this kind of investigation.

When creating the DBQ, we chose documents that helped answer the generative question. We had found some cool documents, but they side tracked too far from our question, so we cut them. Having the generative question kept us focused on the main point of the DBQ. In addition we also created follow-up question to each document, which helped us pick quality documents. If the document could only address one question then it probably was not the best source we could use. We made sure to use sources that could be asked several questions because they held a decent amount of information in them for students to discover.

The final project which can be found on Learnist and soon on an iBook, met our goals. Our DBQ allows students to see for themselves how America came to have such an intense fear of communism through films, articles, and posters. Our DBQ took a media lens to the issue, examining the creation of an enemy based on characterizations rather than on facts or true events. 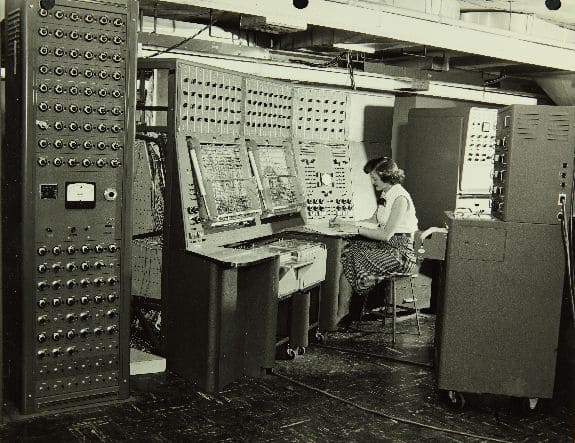 This class continued in our 3rd session of Lesson Studies Fishbowls, but added a tech focus.

Peter shared a few of his favorite websites for students applying analytic thinking to history and social studies. They included: 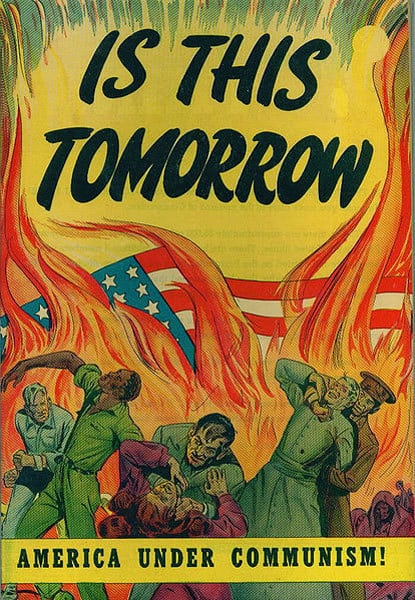 Christina Steiner and I are in a group. For our topic we are looking at the 1950’s Red Scare in America. The generative question we have right now is “How does a nation develop such an intense fear and enemy, creating mass hysteria?”

For this DBQ we will be looking at what the media produced and the tactics they employed. Of course there are plenty of propaganda posters depicting the “evil commies,” as well as “informational” videos created about the communist threat. We are also thinking of having the students read an excerpt from the McCarthy hearings, and possibly newspaper clippings from the time, so the DBQs will not be all image based.

Students will be able to look at the DBQ, whether it is images or documents, without any previous knowledge of it and point out different aspects that either promote or reject a certain group, person, or country. Students can then answer questions such as: what is it saying about that group? How does it say it? Etc.

Additionally the generative question can span to almost any war era or period of fear. Also students will be able to draw connections between how media portrays the “wrong” thing today, to how it did in the 1950s.